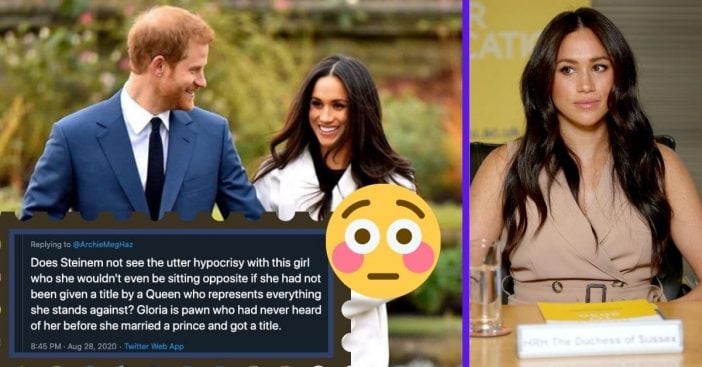 Meghan Markle is being mocked by Royal fans online after an awkward statement she made. She said that women should be “linked not ranked” during an interview with feminist and author Gloria Steinem. Their discussion with one another focused on “representation, why each vote matters and how all women ‘are linked, not ranked.'”

It was the use of a Royal title next to a statement such as this that many Internet users questioned and even mocked. “‘All women aren’t ranked’… yet still uses the title,” someone writes. One Twitter user actually saw this as a dig at the Royal Family. “Women linked not ranked. Def a dig.” They added, “But coming from Duchess Meghan ya gotta laugh.”

Another fan adds, “Isn’t using her title for this implying her rank though.” One more says, “It’s not a great look to have the main quote from the interview be about women being ‘linked not ranked,’ and be referred to by your literal rank.”

Others said that the use of the Royal title undermines Meghan’s calls for equality of the sexes. “But why try talking about being equal when HRH Megs insists on using a title of hierarchy on every occasion while pretending she’s one of us,” someone asks. Another says, “In that case why is Meghan using her rank? Seems hypocritical. Also, pure coincidence that Meghan & Gloria are signed to the same speaking agency I’m sure.”

Both Steinem and the Duke and Duchess are represented by the speaking agency Harry Walker. The agency is currently helping to organize events to allow the Royals to discuss topics that they are passionate about. “The conversations will relate to topics that are important in their lives — and in the world,” they tell Town & Country Magazine.

“Topics will largely relate to the social issues the world is facing now including racial justice and gender equity, mental health, issues impacting women and girls and the environment — as well as the intersectional nature of these issues”.