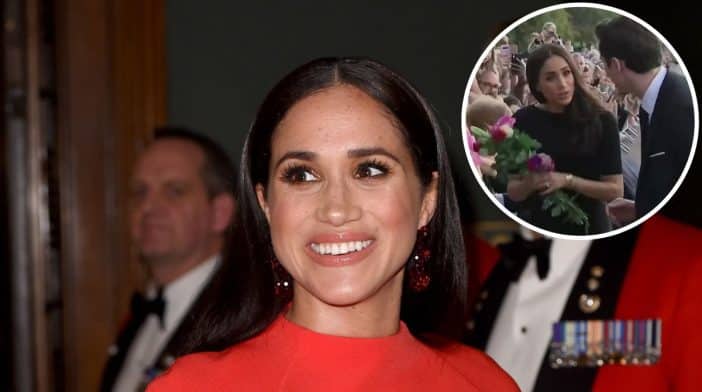 No matter what Meghan Markle does, she can’t seem to win over some particular faction to her side. Even acts with innocent intentions are termed on the wrong side. The Duchess of Sussex recently came under fire for insisting on personally dropping the bouquet a mourner gave her during a tribute session for the late Queen Elizabeth II. In a video that surfaced online, Meghan was seen refusing the first Royal aide’s request to help her out.

Although no one heard the exact conversation, it was assumed she said she would drop the flowers and thank the aide until another person came to explain the situation to her and successfully collected the bouquet from her. However, when the video made it to Twitter, what an innocent person would call a selfless act, was twisted into a photo op tactic.

The first aide tried unsuccessfully to take the flowers from her. pic.twitter.com/4w32pNPrek

The video was captioned, “The big guns had to step in when Meghan refused to let go of the flowers the first aide tried to take from her as she herself wanted to walk them over to the other tributes.” Then people started generating their own theories and insinuations about Meghan’s intentions, “She wanted it for the optics but it got squashed by people who know exactly what she’s trying to achieve.🤣” Another user replied, “I’m thinking so she gets the money shot when she places the flowers down with the other floral tributes.”

Giving their opinion of Meghan, someone else wrote, “She probably wanted to be captured and filmed when she walks alone put flowers over there and put an action. Actually, if you think about it, she really is a narcissist, always trying to make everything about her in every occasion! Glad she was stopped!”

The Duchess of Sussex was doing her best

Some Twitter users came to her defense, “Can’t believe the Meghan bashing has started already, it’s the first time she’s experienced this and was doing her best she probably promised to lay the flowers down herself and that’s what she was going to do till told by Harry it’s alright to pass them over.”

While someone else tried to explain the reason behind the protocol, the Duchess broke, “She probably didn’t understand that the flowers are taken off them for safety purposes. After all, there could be a small explosive device, nerve gas, a poisonous insect, any number of things, concealed in them. ”