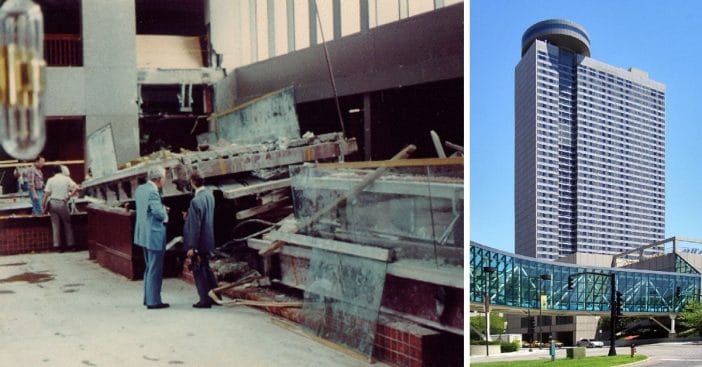 In July of 1980, The Hyatt Regency Hotel opened its doors in Kansas City, MO. This new hotel, with its revolving restaurant, large atrium, and exhibit hall would contribute to the ritzy environment of the Crown Center commercial complex. Visitors soon began to pack the atrium for the hotel’s regularly held “tea-dances.” Kansas City’s newest attraction seemed to be a success.

Then on July 17, 1981, tragedy struck. Over 1,600 revelers had gathered for one of these tea dances that had become so popular for locals. Dancers flocked to the atrium while dozens of people watched on the suspended walkways above. Suddenly, two of these walkways collapsed, resulting in 114 deaths and over 200 injuries. At the time it was the deadliest structural collapse in America.

Rescue teams from the Fire Brigade, EMS units, and doctors from multiple hospitals quickly arrived on the scene, but what they found was like a war zone. Steel, concrete, and glass from the collapsed walkways trapped victims both living and dead. Some survivors even needed limb amputations to be removed from the wreckage.

RELATED: 9/11 Memorial Tribute Back On After Initially Being Cancelled

To make matters worse, the atrium began to flood due to damaged sprinkler systems that could not be turned off. Trapped victims were now in danger of drowning. Airborne dust and debris limited visibility as rescue teams did everything they could. Makeshift morgues and triage centers were set up outside.

What could have caused such a terrible tragedy? Investigations after the incident found that a change to the original design of the walkways was approved by the structural engineer. This turned out to be a huge mistake. According to an article in the Kansas City Public Library archives, “The original design had called for sets of support rods to suspend the fourth and second-floor walkways from the ceiling. Instead, the designs were changed so that a second set of rods hung the second-floor walkway from the fourth-floor walkway.”Due to this new arrangement, the upper walkway had to support its own weight as well as the walkway below.

The video above uses the analogy of two people swinging on a rope. The original design would have been the equivalent of both people holding onto the rope. However, the design change was the equivalent of one person hanging onto the other’s ankles, therefore decreasing the stability of the person hanging on the rope. What seemed like a subtle adjustment soon spelled catastrophe. For a more in-depth explanation of the mistakes and miscommunications that caused the collapse please see the videos linked in this article.

The collapse of The Hyatt Regency Hotel had serious consequences for hundreds of people. Responsible engineers and firms had their licenses revoked. Victims and their families were given financial compensation, but the lives lost and trauma suffered could never be undone. To make matters worse, the collapsing walkways were a completely avoidable tragedy caused by miscommunication, negligence, and human error.

The Hyatt Regency Hotel has since undergone renovations and refurbishments. It remains open today under a new name: The Sheraton Kansas City Hotel at Crown Center. Although the tragedy occurred nearly 40 years ago, Kansas City locals still remember friends and loved ones who were affected by this collapse. The Hyatt Regency walkway collapse remains the deadliest non-deliberate structural failure in U.S. history.