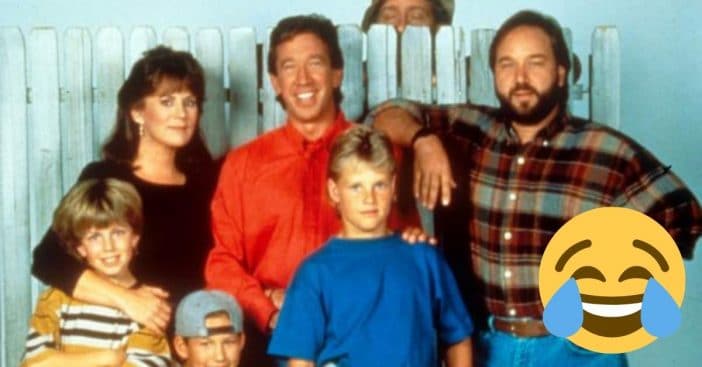 If you used to watch Home Improvement, all of these quotes should bring back some memories. The show has been off the air for about 20 years, but the humor is just as funny today as it was then. The series followed Tim “The Tool Man” Taylor (Tim Allen), his wife Jill, and three boys.

Tim worked on a show called Tool Time with his buddy Al. We can’t forget the neighbor Wilson who always talked to Tim by the fence! Let’s take a look at some of the funniest quotes from the sitcom that still hold up today.

“Was there a guy with a whole table stuck to his head?”

Tim Allen once admitted that one of his favorite episodes is when Tim gets his head stuck to a table. He comes home with a piece of wood still stuck to his head and admits to his wife that they wouldn’t help him at the hospital! He said, “They said I wasn’t a priority.” Jill laughs and says, “Why? Was there a guy with a whole table stuck to his head?”

RELATED: Where Are The ‘Home Improvement’ Brothers Now?

“One more head injury and we win a trip to Hawaii!”

Tim was so accident-prone on the show, there were tons of quotes joking about his clumsiness. His son Randy once joked, “My dad’s been in the hospital so much they gave him a preferred customer card.” Tim didn’t take offense, he simply replied, “Yeah, one more head injury and we win a trip to Hawaii.”

“Fine, except for the guy who asked if I wanted a phone book to sit on”

It wasn’t just Tim and Jill with the funny lines, the kids were quite humorous as well. When Randy was able to go into high school early, there was one issue. When his mom asked how his first day went, he replied, “Fine, except for the guy who asked if I wanted a phone book to sit on.” Appalled, she asked if he told the teacher, to which he replied, “It was the teacher.”

“What, you saw your mom in the shower?”

Tim and his friend and co-star Al Borland had the best banter on the show. Al was way more serious than Tim, so they were always bickering. In one scene, Al said, “Brace yourself, Tim. Something awful has happened.” Tim joked back, “What, you saw your mom in the shower?” I can just picture Al’s face after Tim said that!

“Man pain is when you do something stupid”

Many of the funny quotes center around Tim being clumsy or doing something stupid. He tells his son Mark that there are two different types of pain… “pain and man pain.” Apparently, “man pain is when you do something stupid.”