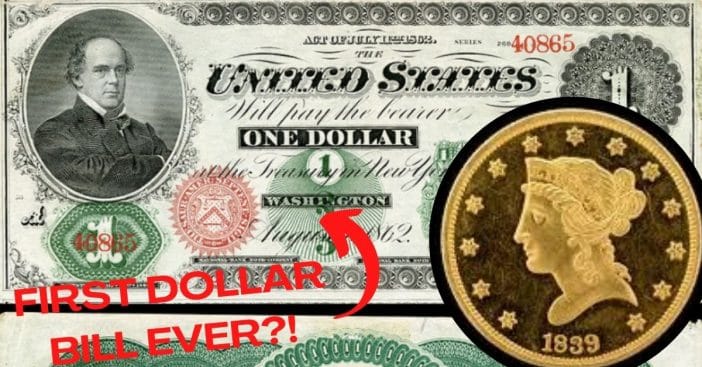 It’s kind of insane to think that at one point in time, we were only using dollar bills. As of 2019, CNBC reports that “roughly 3 in 10 adults said they make zero purchases using cash.” They also report that those who do use cash only carry up to $50 in their wallet. Society is becoming more and more cashless as we progress, many people opting to use their debit/credit cards.

The one-dollar bill has been in existence since the 1800s, but the actual execution of it came with some issues. The public was skeptical that paper currency could be as valuable as traditional silver and gold. However, in part due to war efforts, paper currency became successful as the government saw an increase to finance the Civil War. The paper currency was referred to as “notes” which could be exchanged for coins at any time.

The beginnings of the dollar bill

Salmon P. Chase was the first face to appear on the dollar bill, issued in 1862. He was the treasury secretary under President Abraham Lincoln, so it was fitting to have him be the first face on the first bill. The very first dollar bill had a very distinct look and definitely looks different compared to what we know today. It has a distinct red seal on it with 34 spikes around the seal to represent the 34 states of the Union at the time. Phrases were also incorporated in both English and Latin and later dollar bill designs would include the “In God We Trust” phrase.

RELATED: People Share How Much Minimum Wage Was When They First Started Working

By 1869, a new design was ushered in. The implementation of a new face on the bill – George Washington, the nation’s first president. Due to rising manufacturing costs, the government decided to make the dollar 30% smaller in 1929. Then, by 1990, the government began investing in additional security features such as polyester threads and microprinting. This would help prevent counterfeiting.

Eventually, even the most skeptical people began using paper currency

Of course, there were still a lot of people throughout this whole process that didn’t want to give up using coins. So, as a way to convince people to use paper notes, they issued silver certificates in 1878. It proved to be a very successful tactic, because soon enough, silver certificates became the primary source of currency. Even among the most skeptic people, silver certificates were becoming the next big thing.

Now in 2020, we have many different options to make payments. Dollar bills, debit cards, credit cards, prepaid cards, written checks, and so much more. According to Fundera, “80% prefer card payments over cash. 76% of consumers have at least one credit card. Debit cards account for 67% of card payments.” How crazy to think we have gone from using gold and silver coins to now primarily using a small card that you can swipe or insert by chip in a store.