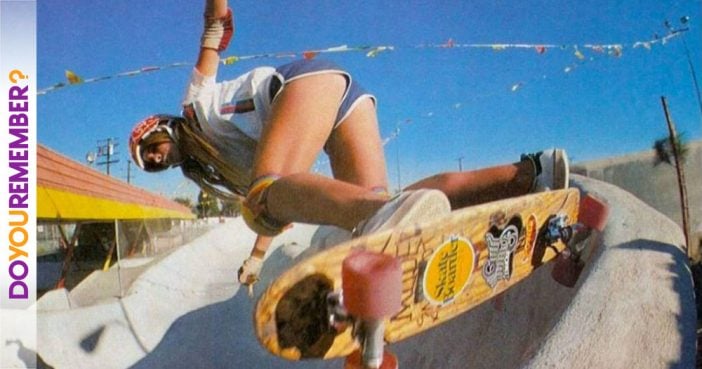 While everyone was zipping around at the roller disco, a group of sun kissed California teens were looking for a place to skateboard.

Banned from public walk ways for general disorderliness, and facing a long standing draught they had a stroke of genius. The private pools of their suburban neighborhoods were drained, and they started surfing the walls of these hallowed out concrete casings.

To be a skateboarder meant more than the rubber tape, clay wheels and wooden board. When I boarded as a young teen, and before Tony Hawk, it was a symbol of rebellion. There was a lifestyle that went along with the sport. We were punk hippies, and urban surfers. We listened to death metal, anarchist punk, and the like. We also broke a fair number of bones.

1958: The skateboard is made from roller skates attached to a board. This is really where “sidewalk surfing” really starts.

1963-66: Surfboard companies like Makaha and Hobie start making better-quality skateboards with clay wheels and trucks that are made for skating.

1963-66:  The first skate contest is put on in Hermosa Beach, California, in 1963. This same year, ABC Wide World of Sports broadcasts the Skateboarding Championships.

1973: With the invention of urethane wheels, new possibilities emerge. Banks and ditches become skateable, as these new wheels can grip the concrete. From this point on, skating will never be the same.

1976-78: New tricks are invented daily—aerials, inverts, and the ollie. Concrete parks are also being built, and the first pro skaters begin to receive notice. However, many skate parks are forced to close due to low attendance and high insurance.

1990s: Skateboarding takes a huge step into the mainstream with ESPN’s eXtreme Games. By the late 90s, skating appears in commercials for everything from soft drinks to phone companies.

2000s: Skating can now be enjoyed by children as young as two. Many cities have built high quality skate parks, and a number of camps and lessons are available to young people. Some families even enjoy skating as a family activity.