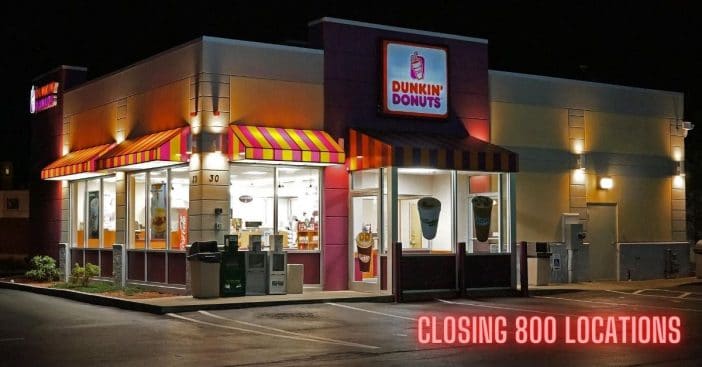 We previously reported that Dunkin’ will be closing 450 locations, all located in Speedway gas stations. Now, Dunkin’ has announced that they will actually be closing 800 stores permanently. 800 locations are still only 8% of the popular coffee and donuts chain.

The locations that are closing are in “low volume sales locations,” according to CNN. The locations are set to close by the end of this year. Dunkin’ also announced that they are looking to close around 350 locations outside of the United States permanently.

Dunkin’ is closing 800 locations this year

The news comes after other fast food restaurants including McDonald’s are closing down hundreds of locations. Likely the closings are due to low profits affected by the coronavirus pandemic. As the pandemic rages on, we will probably see even more restaurants and store closings.

RELATED: Dunkin’ Will Close 450 Stores By The End Of The Year

No word yet on which of the 800 locations are closing except for those in Speedway locations. Dunkin’ has also announced that they are working on new menu items and better restaurant designs. Only time will tell if this will be enough to keep other Dunkin’ locations in business. Is a Dunkin’ location closing near you?