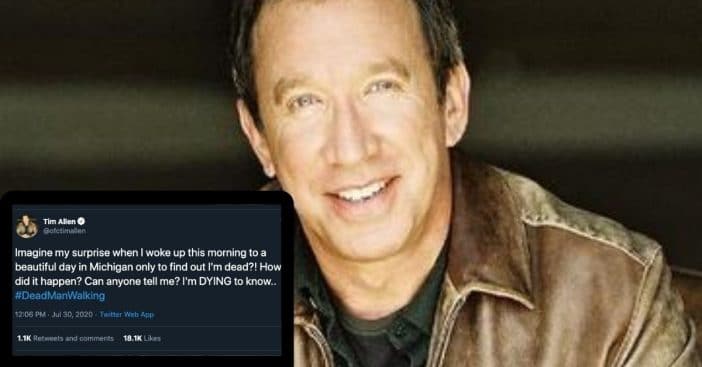 Usually, when celebrities start trending on Twitter it can mean one of two things… they’re caught in some sort of scandal or they’ve died. Of course, when Tim Allen began trending on Twitter, this got fans a bit frightened, fearing the worst. However, the Last Man Standing star is alive and well and fans needn’t be afraid!

The actor took to social media to make fans aware that he was just fine. “Imagine my surprise when I woke up this morning to a beautiful day in Michigan only to find out I’m dead?! How did it happen? Can anyone tell me? I’m DYING to know.. #DeadManWalking” he tweets out to fans.

Imagine my surprise when I woke up this morning to a beautiful day in Michigan only to find out I'm dead?! How did it happen? Can anyone tell me? I'm DYING to know.. #DeadManWalking

Of course, when people start trending, it typically brings up parts of their past, and they continue to trend. Reports say that Allen’s participation in a 1978 drug trafficking scheme was mentioned on Twitter in addition to being arrested for possession of more than 650 grams of cocaine. He was released on parole in 1981 after serving two years in the Federal Correctional Institution in Sandstone, Minnesota. So, he’s definitely worth the talk online! So, needless to say, he just kept trending beyond the death hoax.

Another says, “Get on Twitter. See Tim Allen trending. Check tweets. It’s only tweeted asking why Tim Allen is trending. I believe the simulation is broken and Twitter is actually cannibalizing itself as we speak.” Sounds about right.

Ok, I figured it out. Some nosey neighbor saw what I was having for lunch and 'figured' I was going to die. pic.twitter.com/8HKcKVRyU6

Allen followed up on his tweet by saying, “Ok, I figured it out. Some nosey neighbor saw what I was having for lunch and ‘figured’ I was going to die.” He included a photo of hotdogs. Leave it to Tim Allen to turn a Twitter trending scare into a comedic moment!

RELATED: The Neighbor Wilson In ‘Home Improvement’ Is Based On Tim Allen’s Neighbor Growing Up

Click for next Article
Previous article: McDonald’s CEO Says Law Enforcement May Step In For Customers Not Wearing Masks
Next Post: Dunkin’ Will Close 800 More Locations In The United States