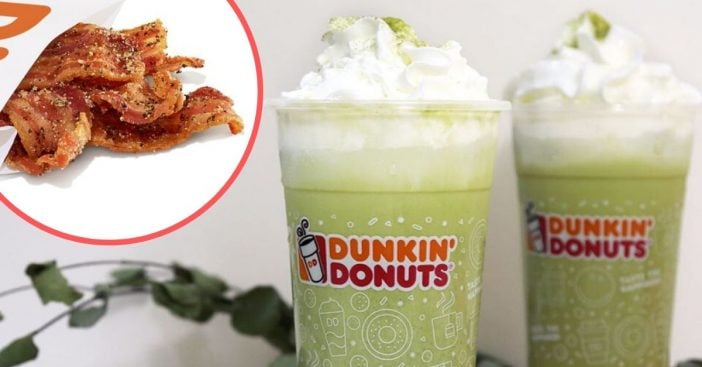 Dunkin’ is releasing several new menu items that have nothing to do with donuts. They are aiming to please a variety of customers. One new menu item is called Snackin’ Bacon and is basically a bag of bacon! It is eight half-strips of bacon wrapped up.

The bacon is similar to that found on Dunkin’s Sweet Black Pepper Bacon Breakfast Sandwich. The bacon is seasoned with brown sugar and black pepper, for the ultimate sweet and savory treat. They call the bacon “high end” and say it has been smoked with natural cherrywood.

In a blog post, Dunkin’ wrote, “Here at Dunkin’, we’ve been working hard to formulate the perfect afternoon pick-me-up and really, what’s better than a bag full of bacon?”

RELATED: Dunkin’ Is Releasing Peeps-Flavored Coffee And Donuts For Easter

In addition, some newer menu items include matcha lattes, a Beyond Meat breakfast sandwich, and a protein muffin. If you love the classic Dunkin’ donuts, right now they are offering a lucky shamrock donut with green frosting and sprinkles for St. Patrick’s Day.

The Beyond Meat breakfast sandwich features meatless sausage. They did a test back in July which did very well, so they rolled out the sandwich to all locations. The sandwich also contains egg and cheese.

For non-coffee drinkers, Dunkin’ has also released a few varieties of a matcha latte. Matcha is a Japanese green tea that has been said to have lots of health benefits. Dunkin’ is offering matcha with your choice of milk in hot, iced, and frozen varieties.

Lastly, Dunkin’ is offering a new protein muffin that includes blueberries, cranberries, pumpkin seeds, and sunflower seeds. It has 16 grams of protein, which would make for a filling breakfast if you don’t enjoy meat and egg sandwiches. Which new menu item are you the most excited about? In conclusion, check out a review of some of the new menu items: