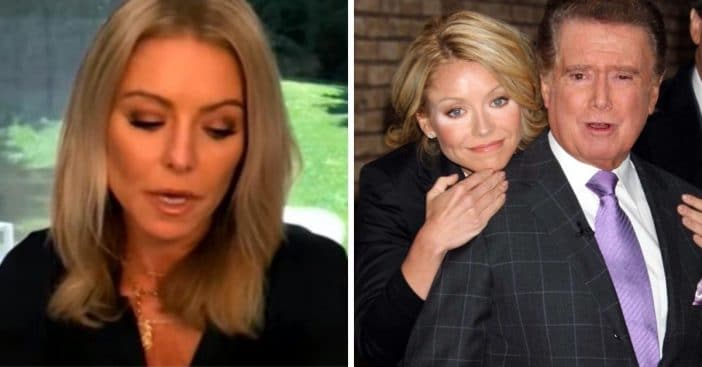 Last night, ABC aired a special called Regis Philbin: The Morning Maestro – A Special Edition of 20/20. In the special, those close to Regis spoke out. His former co-host, Kelly Ripa talked about some of the biggest life lessons that Regis taught her while they worked together.

They co-hosted Live! with Regis and Kelly for 11 years. During that time, Kelly said Regis truly taught her to be herself on camera and off. She said, “What I think my biggest takeaway from the 11 years that I shared with him was that you have to be yourself. You cannot be one person on camera and a different person once the light goes off or the audience is gone. You have to be who you are.”

Kelly also admitted that she hoped it was a mistake when she heard that Regis had died. She shared a joint statement with Ryan Seacrest, her current talk show host. They shared a throwback photo of Kelly, Ryan, and Regis with Mickey Mouse.

The statement read, “We are beyond saddened to learn about the loss of Regis Philbin. He was the ultimate class act, bringing his laughter and joy into our homes everyday on Live for more than 23 years. We were beyond lucky to have him as a mentor in our careers and aspire everyday to fill his shoes on the show. We send our deepest love and condolences to his family and hope they can find some comfort in knowing he left the world a better place.”

Kelly later said that she was with her husband and three kids when she heard the news. She admitted, “We were all together when we heard this horrible news. As people get older, you always know that certain things are inevitable, and passing away is one of those things, but Regis is one of the people that we all believed would somehow figure out a way around the inevitable. It was not in the cards, I suppose.”

Regis truly touched the lives of many. RIP.