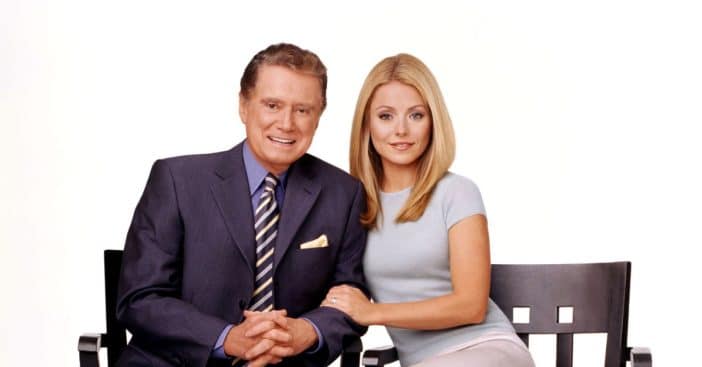 Kelly Ripa has been forced to shed more light on her work relationship with Regis Philbin because of the negative criticism she’s been receiving on her book, Live Wire: Long-Winded Short Stories. She recently got on the Dear Media Not Skinny Not Fat podcast to discuss the circumstances surrounding her job on Live!.

When she got the offer to work on Live!, she thought she was “just filling in for a day” and didn’t realize she was “auditioning for the show.” The 52-year-old show host claimed anyone who read her memoir would know she was on Regis’s side.

Kelly Ripa is on Regis Philbin’s side

“When you’re a new person joining a well-established show and a well-oiled machine, and if you read the book, you know this. I take his side in this entire argument,” she said. “He should not have had to have a host assigned to him. That’s not fair. He paid his dues and he established this show, and I really advocate for him in this book.”

She further explained what might have been the cause of the friction between the two hosts because it involved “two strangers from two completely different generations.” She continued, “It’s like very, very divergent people coming together into this workplace and I felt for him because he was so famous and was so well-established.”

She was insecure when she was new on the job

When she finally realized she got the job, she didn’t know how she’d cope because the All My Children actress was new to hosting, but she claimed, “When has that ever stopped me?” As a naive person in a new territory, she had to watch her steps, “I really was very insecure about my own ability,” Kelly revealed. “But I was hyper-sensitive to the feelings all around me that this was like new and unusual terrain I was wading into.”

Furthermore, she revealed that there were two cabals trying to have a say over her employment. “I didn’t know that there was so much fighting between these two factions and that I was considered like a network girl, which is so ridiculous,” Kelly said. “I was one of a 40-member ensemble cast on a soap opera. So I didn’t consider myself an anything of anything. I considered myself just an actor.”

The Generation Gap host claimed she wouldn’t have taken the job if she knew such tussle was going on behind the scenes because Regis “certainly didn’t need me there” and “didn’t feel like I added anything to him at the beginning.”

Click for next Article
Previous article: Despite Marrying Her ‘All My Children’ Co-Star, Kelly Ripa Doesn’t Believe In Co-Star Hookups
Next Post: WATCH: Two Kids Make Their Own Metallica Video In 1989