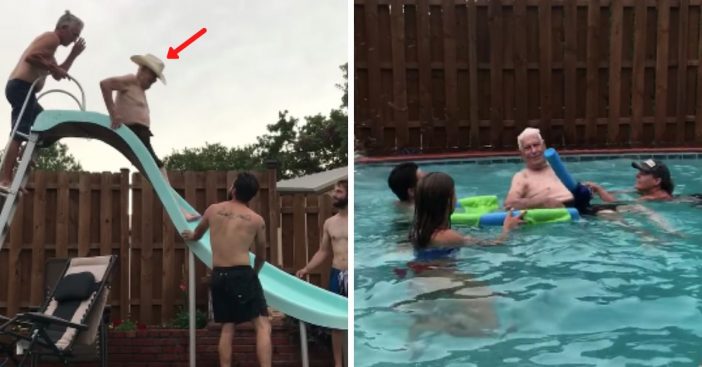 Michael Graham of Choctaw, Oklahoma shared probably the best video of July 2020 so far. He shared a video of his great-grandpa flying down a waterslide. Oh, did we mention he’s 94?! The United States Army Air Corps veteran had the time of his life showing that age is just a number. In the video, family members help veteran Roy Beller up the stairs and cheer him on the entire way down the slide.

The video has garnered over 70,000 reacts and over 300,000 shares! “So cool, love how the young people are so attentive,” one comment says. Another shares, “He is so awesome, I just love him and his positive attitude!”

RELATED: Grandpa Bought A School Bus To Take All Ten Grandkids To School Every Day

Michael talks to TODAY about the now-viral video. “I actually posted it out there thinking that the whole family would all see the video and be excited about watching him go down.” He continues, “I figured it would get a few hundred views. But when it hit a million, I called them up and said ‘Well, you got a million views’ and he said ‘Why in the world would a million people want to watch me going down a slide?’”

He has gone viral since taking the plunge!

Of course, Michael answers his grandfather’s questions. “I said two things that I see. One is people were really excited to see someone of your age still active and doing things. Then the other is there’s been lots of comments, how much people can see the love in the family. And that’s always been a big part of our life. He is the patriarch of the family and everybody gets together and has each other’s back.”

His grandfather also didn’t need any influence or pushing to go down the slide. That was all on his own accord! “The interesting thing was that slide was his idea. We were sitting in the pool and I helped him get down into the pool. He goes to get out and went over… I thought he was wanting to go get in the chair. And I said ‘Do you want to get over to the chair?’ and he said, ‘No, I’m going to go down that water slide.’”

By the time he was finished on the slide and back in the pool with family, he had the biggest smile on his face. Check out the heartwarming video below!