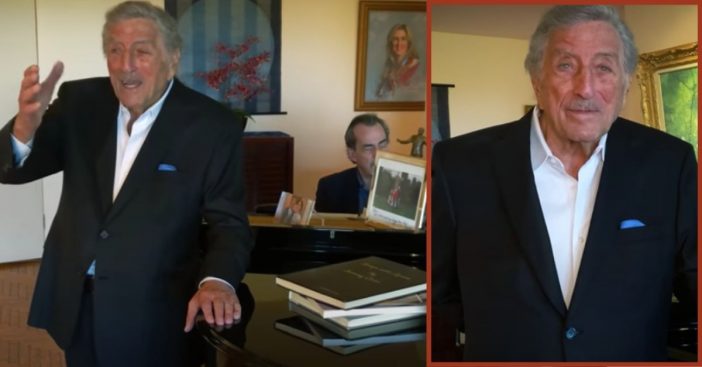 Tony Bennett proves time and time again that he’s still got the chops to belt out a classic tune at 93 years old! He recently posted a video to his YouTube channel singing the hit song “Fly Me to the Moon” from his home. Bennett had a pianist accompanying him in the background as he sang a jazzy rendition of the recognizable song.

The song was first written in 1954 by Bart Howard and Kaye Ballard made the first recording the same year. However, Frank Sinatra’s version might just be one of the most recognizable versions as it was also associated with the Apollo missions to the Moon.

“Fly me to the moon, let me play among the stars…”

Even people watching the video at home had some positive words for Bennett. “This man turns 94 in August of this year and still has a richer voice than many younger singers. The real deal, very classy,” one person shares. Another comments, “Gives me chills, 92 years old and still belting out notes like he’s 25, Tony is a great inspiration to show when there’s a will there’s a way.”

RELATED: Tony Bennett : “I Left My Heart In San Francisco”

A last fan has a nice message: “I don’t think any singer has ever held up so well as him – by this time (or well before) most of even the greatest singers’ voices have faded, a shadow of their former selves – from Sinatra to McCartney we’ve seen it many times and there’s no shame in it, it’s just old age and life – but this guy still has it. he doesn’t just sound “good for his age” – he sounds damn good, period. God love ya Tony and thanks for this.”

Can you believe that Tony is still kickin’ it and nailing all these awesome tunes? Be sure to check out his live performance below. He sounds incredible still!