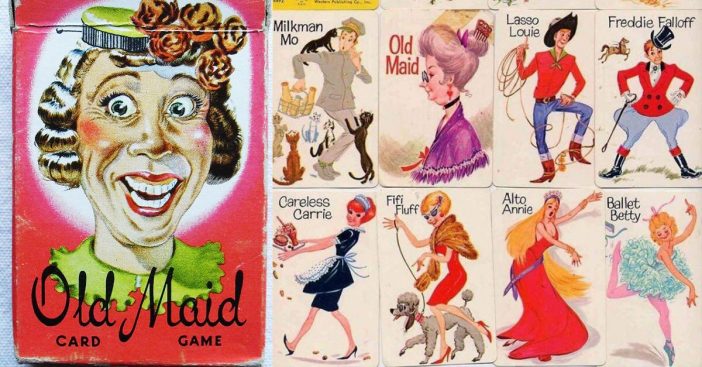 Some classics retain so much power they never fully go away. That can certainly be said when it comes to playing Old Maid. When asked about the card game and corresponding set, many people across generations can recite fond memories.

Part of Old Maid’s power to last lies with how accessible it is. In that way, it’s similar to Go Fish. Adults can play with kids, children can play among one another, and adults can play among themselves. All the while, everyone has a blast with some easy, fast-paced fun. Did you play this with any family or friends? Do you still? Revisit this timeless favorite here.

The game of old maid dates back to the Victorian era. Among adults, the game included elements of bluffing and gambling. When the situation allowed, the lower became responsible for buying winners some drinks. How a person wins depends on the players and the rules they abide by; to an extent, Old Maid can be rather flexible, with different game types that have different goals – or things to avoid.

Like Go Fish, players need to get matches. In Go Fish, in theory, all players have a chance at getting matches. But Old Maid has a card missing. So one person will be “stuck with the old maid” by the end, and that person loses. Players pass cards to the person on their left, who then tries to match that card with one they already have. They get to discard the pair if they do indeed match.

A good game keeps itself relevant

As if that weren’t enough, Old Maid offers not only easy, accessible rules, but also some fun tools to make the experience more fun. Technically, retailers offer decks specifically for this card game. But players lacking a set can use a regular 52 card set, remove one, and proceed accordingly.

The official sets are fun to have, though, as each card (or, pair, rather) depicts a colorful cartoon character. If players use a 52 card set instead, instead of matching up characters, they match up suite colors (red hearts and diamonds match up, and black spades and clubs match up). Have you played any of the variations this game offers? Do you still have your deck?