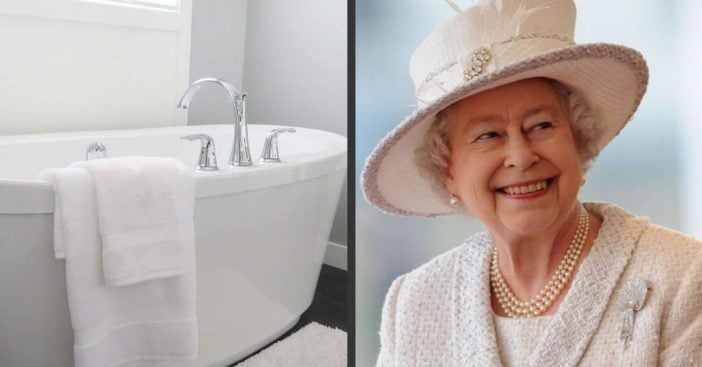 The Royal Family members have a lot of odd rules that they have to follow day to day, but so do their staffers. Queen Elizabeth II’s staffers, in particular, have a set of strict rules they need to follow whenever she bathes. The rules begin when the Queen wakes up in the morning.

She is woken up with her alarm being bagpipes playing outside her window. Once she is finally awake, her radio is turned on so she can listen to BBC Radio 4. This station airs John Humphrys’ political show Today in the mornings. Following that, she is served a fresh pot of Earl Grey tea and biscuits.

The rules that the Queen has for staffers when she bathes

Daily Mail Royal Correspondent Brian Hoey reports that while the Queen is enjoying her tea and biscuits, a maid is getting her bath ready. They make sure that the water is not too hot or too cold, and also that the right amount of water is in the tub. “Her maid will go into the adjoining bathroom to draw the bath, which has to be exactly the right temperature: tested with a wooden-cased thermometer, and no more than seven inches of water,” he says.

She also has a set of rules for when she’s traveling and taking baths on the Royal Train. When her Majesty is on board, she takes a bath at 7:30 sharp, and operators are required to drive very carefully. They have to be mindful not to hit bumps so that the Queen can have a smooth bath.

Prince Charles is apparently very particular about his baths as well. He wants all his staffers to be aware that “the bath plug has to be in a certain position and the water temperature has to be just tepid.”