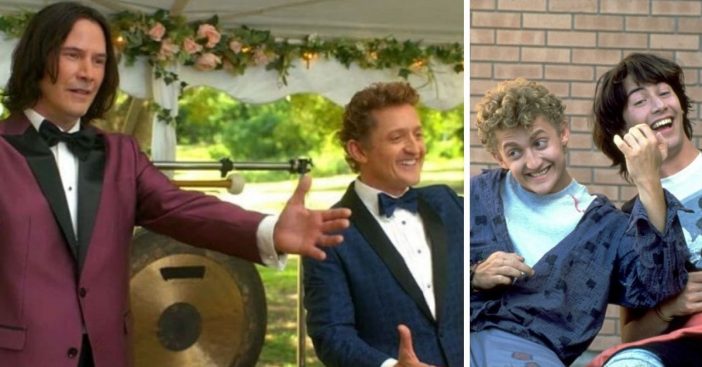 We previously reported that Keanu Reeves and Alex Winter are back in their iconic roles of Bill and Ted. This time, they are all grown up and have kids of their own. The film is called Bill & Ted Face the Music and comes 29 years after the last film.

According to Wikipedia, the premise of the new film is: “Now enduring the monotony of middle-aged life, William “Bill” S. Preston, Esq. and Theodore “Ted” Logan are warned by a visitor from the future of the need for them to create a song in 78 minutes that will save all life on Earth and the entire universe. The pair work with their families, old friends, famous musicians, and each other to complete the task.”

Watch the official trailer for ‘Bill & Ted Face The Music’ below

William Sadler will also return to reprise his role as Death. In addition, Samara Weaving and Brigette Lundy-Paine will play Bill and Ted’s daughters. Musician Kid Cudi, Anthony Carrigan, and Beck Bennett are also set to star. The movie was written by Chris Matheson and Ed Solomon, who wrote the 1989 original movie.

The film is set to premiere on August 21, 2020. Likely, it may get postponed or be an at-home release. In the trailer, it simply says a summer release which gives them a little more wiggle room.

In conclusion, watch the trailer below. Are you excited for the new film?