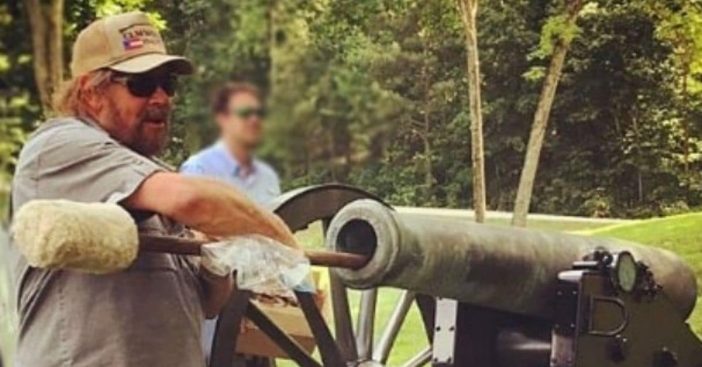 Hank Williams Jr. is a legendary country musician and reportedly a Civil War buff. The musician has always been interested in American history. In fact, he has been known to collect some incredible pieces. For his 70th birthday, he got the honor to blast a Civil War cannon.

He owns many artifacts from the Civil War and now he owns cannons, weapons, and other items used in that time period. On his 70th birthday, Hank decided to blast one of his civil war cannons. It still works perfectly, after over 150 years!

Hank’s children, Hilary Williams and Sam Williams shared some photos and videos of the cannon going off to celebrate their dad’s birthday. Hilary wrote, “Happy 70th Birthday Dad! Blasting off into your next decade!! Just a normal day in the Williams family shooting off cannons from the civil war.”

Sam captioned a photo, “Happy birthday Dad! I had to get the icon an iconic gift this year, so I commissioned a painting from @raybomusic to commemorate his career. Thank you so much for your talent on this project Ray!! Being in the spotlight from a teenager on, my father’s life has been a whirlwind. I’m so thankful that God spared your life in 1975, I see the incredible things you’ve done from selling 70 million albums to being there for your youngest kids. Everyone who is anyone in music looks up to your authenticity, independent attitude, and ability to straight up entertain.”

He continued, “But y’all don’t get to see that he’s actually the funniest person on earth without trying. For example, the stories and manner in which he shot his Civil War cannon today 😂😂 As a child I was intimidated by my family’s status and my dad’s career.. I grew up to now idolize so much of who you are. Everyone say Happy Birthday Hank!!!! He’s already asleep that’s for damn sure ❤️❤️❤️❤️❤️”

Happy birthday, Hank! In conclusion, watch Hank set off the cannon below (scroll through to see the video):

Click for next Article
Previous article: Miami Dolphins Will Host Drive-In Theater At The Hard Rock Stadium
Next Post: Disney World Plans To Open Some Of Its Parks By July