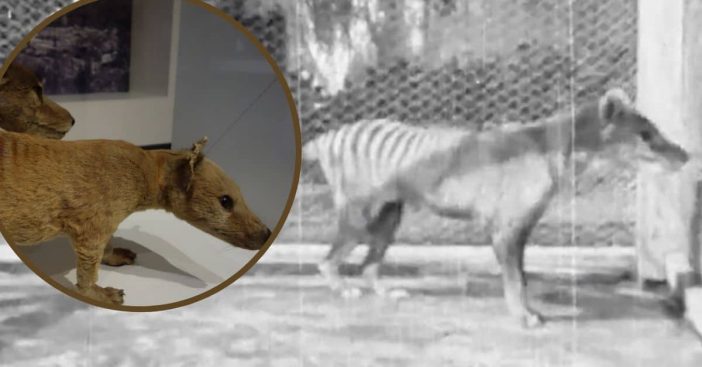 Footage of the last known Tasmanian tiger has been released and it’s from 1935! The 21-second clip shows the animal, named Benjamin, circulating around his cage at Beaumaris Zoo in Hobart, Tasmania. The footage was recorded in 1935, specifically for a travelogue called Tasmania The Wonderland. This footage was filmed just a few months before Benjamin sadly passed away.

“We have released 21-second newsreel clip featuring the last known images of the extinct Thylacine, filmed in 1935, has been digitised in 4K and released. Be sure to check out the footage of this beautiful marsupial,” a tweet with the footage linked reads. The footage was posted by the National Film and Sound Archive of Australia.

A look at the last known Tasmanian tiger to exist

We have released 21-second newsreel clip featuring the last known images of the extinct Thylacine, filmed in 1935, has been digitised in 4K and released.

Tasmanian tigers were incredible creatures that took on the appearance of a wolf, a fox, and a large cat mixed together. They would hunt kangaroos and other marsupials, in addition to rodents and small birds as well. Tasmanian tigers were incredibly common to see around Australia, but soon became extinct around 2,000 years ago. This was due in large part to dingos and hunting pressure from humans.

The tigers were then confined to the island of Tasmania, where the remainder of the population soon declined even further with the onslaught of dogs and more hunting. The narrator in the footage notes that, even at that time in 1935, the Tasmanian tiger “is now very rare, being forced out of its natural habitat by the march of civilization.”

The official extinction of the species as a whole

Benjamin was the last known Tasmanian tiger in captivity, in addition to the last moving images of one of the marsupials. He passed away on September 7th, 1936 and this is thought to mark the official extinction of the species. Before Benjamin, another tiger had died at London Zoo in 1931.

NFSA Curator Simon Smith speaks in a press release about the remarkable footage. “The scarcity of thylacine footage makes every second of moving image really precious,” he says. “We’re very excited to make this newly-digitised footage available to everyone online.”