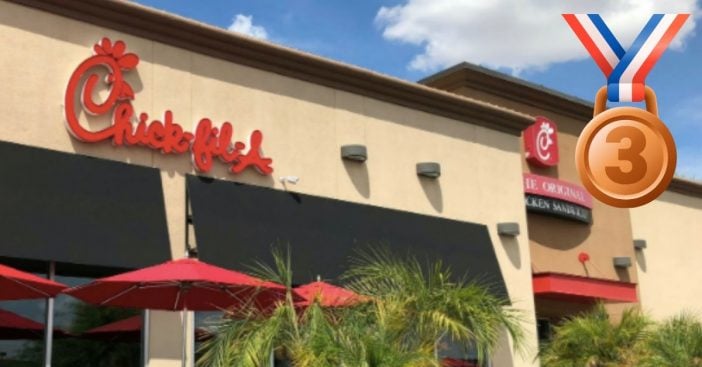 Chick-fil-A has now surpassed Taco Bell and Subway as the third most popular restaurant in the United States. The Atlanta-based chain netted $11.32 billion in sales in 2019, which surpassed Taco Bell’s sales. Currently in its way is Starbucks at No. 2 and McDonald’s at No. 1. Starbucks netted $21.38 billion in 2019 while McDonald’s racked up $40.41 billion. So, it’s a long way for Chick-fil-A to catch up, but they certainly have a chance!

Restaurant Business writes about Chick-fil-A’s growth in 2019, despite other big restaurant happenings. “While Popeyes got a lot of the chicken buzz in 2019, Chick-fil-A had a busy year in its own right,” they say. It’s also worth noting how Beyond Meat stocks were on the rise last year with Burger King’s Impossible Whopper. However, BK still only managed a fifth-place spot, netting $10.2 billion.

Chick-fil-A the third most popular restaurant in the U.S., when could they reach No. 1?

Chick-fil-A has often been the go-to restaurant for many. This is due in large part to its employees being some of the kindest and courteous of any restaurant. Chick-fil-A trains its employees to say certain things like, “My pleasure,” “please,” and “thank you.” It’s no wonder why Chick-fil-A was rated the most polite restaurant chain a few years ago.

On top of Chick-fil-A’s extremely polite and happy employees, they are also quick and accurate on every occasion. This obviously makes customers into loyal regulars, often returning many more times after that. With all of this combined with its sky-rocketing sales, we could very well see Chick-fil-A at the No. 2 spot for the most popular restaurant next year, or even No. 1.

Click for next Article
Previous article: McDonald’s Will Look Very Different When It Reopens Its Dining Areas
Next Post: Sharon Osbourne Thinks Big Women Are Not Truly Happy With Their Bodies