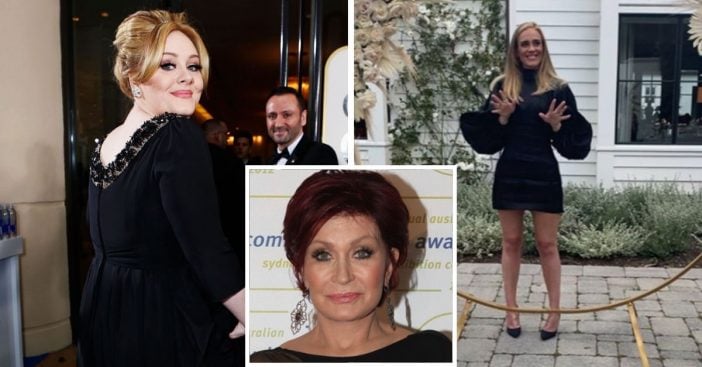 Singer Adele has made headlines recently after a photo began circulating online showing her dramatic weight loss. The singer lost around 100 lbs and the photo posted online sparked a debate about weight loss and self-love. Adele’s personal trainer came to her defense, saying that her weight loss “was never about getting super skinny,” but “about getting her healthy.”

Sharon Osbourne has shared her own thoughts on Adele’s weight loss on a segment of The Talk. She says that while other people’s weight never affected her, she did share a connection with Adele when Osbourne, herself, was bigger.

“I never let it get to me, but I totally understand with Adele,” Osbourne says.  “It was her time to lose weight, that’s all, in her journey, in her life. She must have felt, ‘You know what, I’m going try to lose some weight.’ For whatever reason, health, I’m sure, and you know what, she looks absolutely fantastic. I’m happy for her, and everyone should be happy for her, because it was her choice. She didn’t do it for anybody else but herself and so everybody should be happy for her.”

RELATED: Woman Loses 112 Lbs And Wins Beauty Pageant After Fiancé Leaves Her For Being ‘Too Fat’

Osbourne had gastric band surgery in 1999, ultimately helping her lose 100 lbs. She then had her band removed in 2006.

Marie Osmond chimes in with her own experience and thoughts

“When I was 100 pounds overweight, I used to feel comfortable when I was with bigger women,” Osbourne continues. “I must say that I felt like we had something in common. We never spoke about it, but there was this underlying connection that we had. I always felt that. But mine was a kind of shield. I loved it because every guy was my friend. I was never a threat to any woman. And I used to have the best time with guys, you know? ‘Oh, bring Sharon along, she’s good for a laugh…’ that sort of thing. And I kept it as a shield.”

Marie Osmond, who has also dealt with weight issues and weight loss, chimes in. She says her own mother’s weight loss affected her to a point. “Because when I started to give up on myself, I believed that it was genetic. I mean, I really did. But having children be concerned with my health and having me around in their lives got me to lose my weight, my 50 pounds. It motivated me and I’m sure that that’s what probably is happening to Adele. Like you said, Sharon, you get to a certain place in life, and she wants to be there for her son. And she seems — she’s doing it in a healthy way. So I’m excited for her.”

Sheryl Underwood adds, “But I think there’s something to be said about the voluptuous person who says they’re confident, not just Adele, but if you look at other women who say I’m happy where I am, and then all of us who are voluptuous say yay! And then all the sudden you change or you evolve into something else, and people may have been betrayed.”

Osbourne then says, “When really big women say they’re really happy in their body, I don’t believe them. Because I was really, really big and I wasn’t happy,” Osbourne continued. “Sure, on the surface, ha, ha, but at night, in bed, alone, I was very unhappy.”

Click for next Article
Previous article: Chick-Fil-A Surpasses The Third Most Popular Restaurant In The U.S.
Next Post: Mary-Kate Olsen Is Getting Divorced And Trying To Save Her ‘Full House’ Money