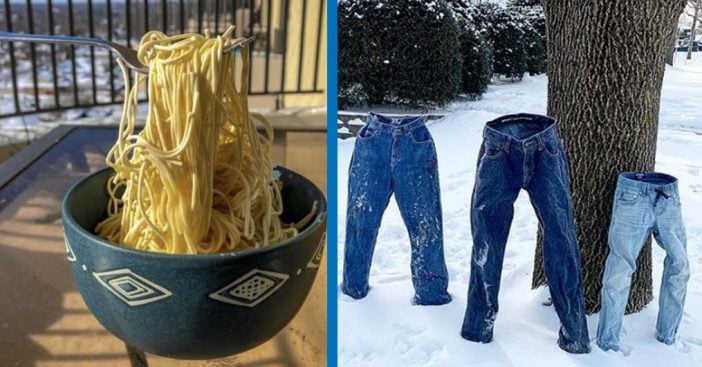 This past week we announced the arrival of the polar vortex, which would bring bone-chilling temperatures to the midwest and northeastern parts of the United States. Some of the cold temperatures could even drop down to the southern area of the U.S. and we’re all feeling the winter chill!

Some people have taken to social media to document just how cold it is where they are. With some areas of the U.S. experiencing a -45-degree wind chill temperature, it’s no surprise that some items are literally freezing in place. Check these out!

How cold is it in Chicago at the moment….? pic.twitter.com/U3wJnHZwFY

This has to be magic. But Chicago got some of the coldest temperatures on record for this polar vortex so we’re honestly not that surprised.

It’s so cold in Cadillac…even the light posts are shivering! pic.twitter.com/LWGTuSLk60

It’s so freakin’ cold that the light posts are literally shivering (or it could just be the wind). Either way, there’s video proof.

It's so cold out we decided to try a fun science experiment. Blew some bubbles outside and watched them freeze solid in seconds! Very cool! #newx #iawx pic.twitter.com/5r90seL2L4

The National Weather Service out in Omaha tweeted that the blew some bubbles outside and they froze solid in just seconds. That’s how cold it is.

It's so cold in Chicago they set our commuter train tracks on fire to warm them pic.twitter.com/FT2erQ6pHT

The news actually began to report this one shortly after it happened. Desperate times call for desperate measures, no?

It's so cold out. This is where my chickens are right now pic.twitter.com/sct3faE4fy

Angela from Twitter took her pet chickens indoors because it was way too cold to be out in their normal resting area. They’re probably really confused.

Page Page 1 of 2
Previous article: The Best Tips For Organizing Your Entire House From Decluttering Queen Marie Kondo
Next Post: The Cast Of ‘The Big Bang Theory’ Can’t Hide Their Emotions About The Series Ending