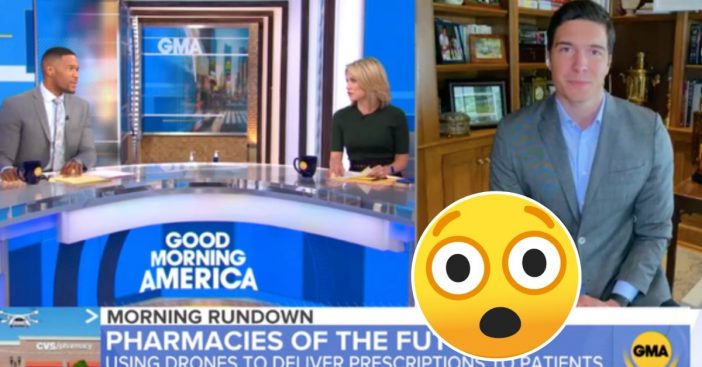 Since many people have been required to work from home, this means all the news and weather reporters you’re seeing are also doing all of this from home. Well, one reporter didn’t have it so lucky when he didn’t realize his little wardrobe malfunction was visible to everyone watching! Will Reeve, an ABC reporter, appeared on Good Morning America to talk about a piece he did for them. It was about using drones to deliver prescription medication to people in a Florida retirement village.

“What is an innovative, high-tech way to get people their medicine quickly while promoting social distancing?” Reeve asks in a live-cross to the studio from his home. “Drones!” He was so cheery he didn’t realize that everyone could see he didn’t have pants on!

Will Reeve experiences a wardrobe malfunction

Now, in his defense, this is a normal look for most work-from-home employees. When going on for video calls, it’s normal to be all done up from the waist up so you appear to be in ‘work clothes.’ But, most people prefer to go with sweatpants on the second half or even pantsless, so I get it!

Unsurprisingly, this moment began to trickle onto the Internet, giving fans at home a good laugh for the day.

Hey put some pants on my guy pic.twitter.com/PpCIBRrjP5

“Hey, put some pants on, my guy,” Adam Graham says.

Is it too much to expect reporters to wear pants?@GMA pic.twitter.com/064cNDsmID

One Twitter user asks, “Is it too much to expect reporters to wear pants?”

He has encouraged everyone to have fun with it and have a good laugh!

@GMA I think Will forgot his pants this morning! pic.twitter.com/HumJEdBo7h

Another writes, “I think Will forgot his pants this morning!”

Now, before everyone gets upset that we’re making fun of Will and his wardrobe malfunction, he’s already addressed it. In addition, he encourages everyone to have a good laugh about it!

When WFH goes wrong (or, your self-framed live shot goes too wide).
Hope everyone got a much needed laugh 😂 pic.twitter.com/GbyLBhL7Be

“When WFH goes wrong (or, your self-framed live shot goes too wide). Hope everyone got a much needed laugh.” For instance, he later admitted that he had been wearing workout clothes underneath his normal work attire, going along with his post saying that this experience has made him “rethink his morning routine.”

Kudos to him for being such a good sport about it! In conclusion, watch the clip below!