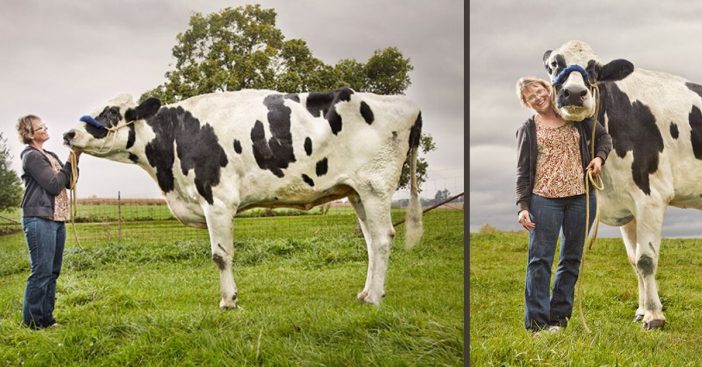 Here’s a cow you want to ask for help reaching the top shelf. Blosom, all six feet two inches of her, became part of the Guinness World Records in 2014 for her impressive height. Her owner, Patty Meads-Hanson, does not even reach up to her eyes in pictures of them together.

Blosom did not just stand tall above her owner. She was taller than most of her peers, who are already part of a famous group of milk producers. As a Holstein cow, she was part of the most famous group of milk-producing cows on the planet. But Blosom’s fame comes from her height, which is hard to miss – like the rest of her. Meet this big bovine here.

Blosom may be famous as the world’s tallest cow, but she just wants to eat

Country Rebel writes that, according to her owner, Blosom was a humble cow. Though Blosom stood at 74.8 inches (most Holstein cows grow to 58–65 inches tall at the shoulder), she didn’t let all the attention she’s gotten as the world’s tallest cow go to her head.

RELATED: Some Of The Coolest World Records Actually Set By Kids

“The funny thing about Blosom was how unaffected she was by all the attention that seemed to surround her,” owner Patty Meads-Hanson explained. “As long as she had her oats, daily chin rubs and ear scratches, life was good.”

All that height made Blosom a hefty cow. AgWeb writes she weighed around 3,000 pounds. Unfortunately, she still suffered ailments as any other animal would. She was 13 years old when everyone learned her name as the world’s tallest cow. Then, sadly, she passed away a year later due to an irreparable leg injury. Meads-Hanson got Blosom from her father, who raised the cow since she was 8 weeks old at the family farm in Orangeville, Illinois.

Another year later still, in 2016, her image was immortalized in the Guinness Book of World Records. The organization also compiled a video detailing her story. Watch below and learn more about this remarkable animal who set the bar improbably high. Before her, the record holder was Mount Katahdin, who was only 0.8 inches shorter than what Blosom came to be.