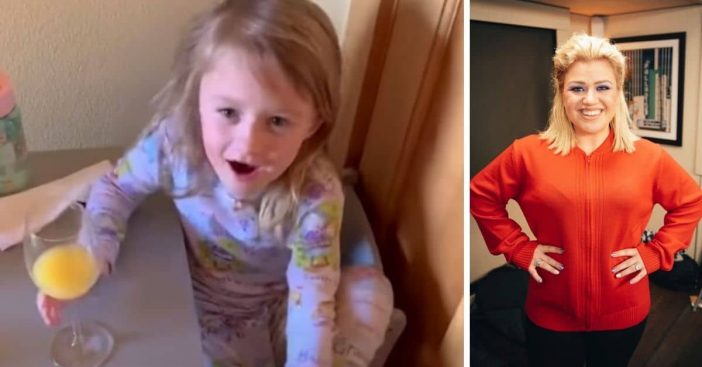 The video description reads, “Since every day is Take Your Daughter to Work Day when you’re in quarantine, Kelly Clarkson’s daughter River Rose tries her hand at being a talk show host and spreads some cheer. Like mother, like daughter!”

In the adorable video, River Rose is wearing pajamas and drinking orange juice from a wine glass. She starts by saying that there is a “snickness,” going around and while we can’t be together, it’s OK. She continues, “We can still call… and when you’re sleeping, you can still dream about your children.”

The opening of the clip says The River Rose Show. At the end of the clip, she says, “I hope you’re doing fine, and I love you.” Then she blows a kiss at the camera! How sweet is she? River Rose has been known to appear on Kelly’s talk show and often steals the spotlight.

Last week, River Rose and her four-year-old brother Remy, jumped in their mother’s interview with Justin Timberlake and Anna Kendrick. They are the stars of the recent kid’s movie Trolls World Tour. Hopefully, we will see more of the adorable kids soon! Watch the clip below:

Click for next Article
Previous article: 93-Year-Old Gets Free Beer After Holding Up Sign That Says “I Need More Beer”
Next Post: Peter Frampton Is A Grandfather! Daughter Jade Frampton Shares Photo Of Newborn Baby Girl