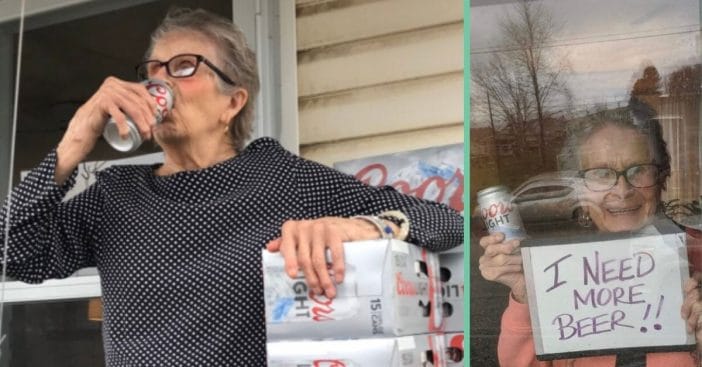 Olive Veronesi is a 93-year-old in Pennsylvania that is currently quarantined in her home. A photo of Olive went viral after she held up a sign that read “I need more beer!” in her window. In the photo, she also held up a Coors Light bottle, her beer of choice.

Molson Coors saw the viral tweet and decided to deliver. The company sent Olive 150 cans of Coors Light. That should last her a while during this quarantine!

A representative for Molson Coors said, “When we saw Olive’s message, we knew we had to jump at the chance to not only connect with someone who brought a smile to our faces during this pandemic but also gave us a special opportunity to say thanks for being a Coors Light fan.”

RELATED: Busch Giving Away Free Beer For Those Who Foster Or Adopt A Dog Right Now

They also offered Olive more free Coors Light whenever she runs out! It sounds like she has free beer for life. After she got the delivery, a relative took photos (from a distance) of Olive with a sign that says “Got more beer!” with a heart. They also took a photo of the 93-year-old drinking one of the beers next to the delivery.