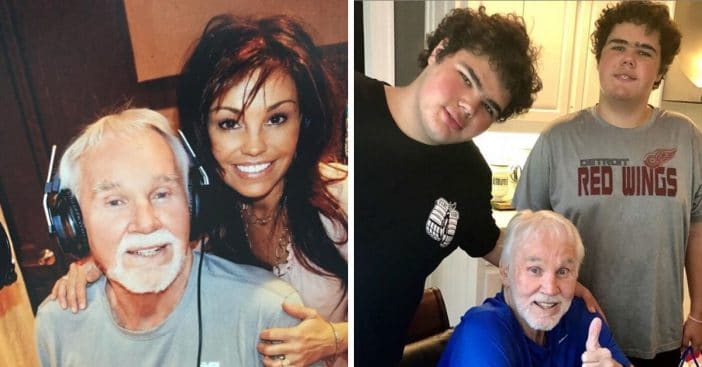 Sadly, Kenny Rogers passed away a year ago at the age of 81. He left behind his widow, Wanda, who was actually his fifth wife. He also had five children from his other marriages, including twin teenage boys with Wanda. The twin boys, Jordan and Justin, are currently fifteen years old.

The couple got married in 1997 and have been going strong ever since. From Kenny’s old photos on social media, it seems like he was a family man and loved to take his kids on tour with him. However, it wasn’t always so easy. When Wanda and Kenny first started dating, her parents were not happy.

There was a 28-year age gap between Kenny and Wanda. Wanda’s parents are actually a few years younger than Kenny was! So, at first, they were a little uneasy about the relationship, as any parents would be. He assured them how much he loved their daughter and as the years went on, things improved and Kenny said before he passed that they became best friends.

We sat down with Kenny Rogers once and he revealed while he missed being on the road, he loved spending more time with his teen twin boys. He said, “They keep me very busy!” Kenny’s kids are Carole, 61; Kenny Jr., 55; Chris, 38; and 15-year-old twin sons Justin and Jordan. We bet his family misses him dearly. We sure do!

Since his death, Wanda has been posting tons of photos on social media consisting of both the late country singer and the kids. It’s been a tough time for Wanda and the family as they’ve all been reminiscing on memories. “It has been 11 months .. Time isn’t slowing down…” Wanda captions one of her Instagram photos.

Wanda actually did speak out on the anniversary of her husband’s death a few weeks ago. “A year ago.. our lives changed forever… but as KR always said, ‘You’re never gone until you’re forgotten.’ We will always love you.”

Check out the untold story of The Gambler himself by checking out the video below!