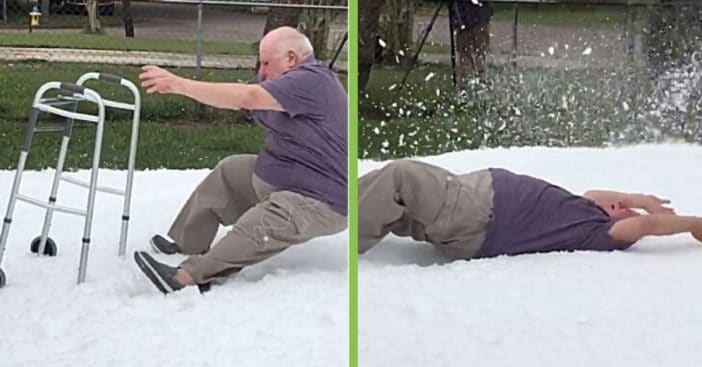 Albert Septien is a Vietnam War veteran who is 76 years old. He currently resides in Florida and has terminal cancer. When he found out he didn’t have much longer to live, he had one last dying wish. To make a snow angel! He was diagnosed with melanoma and was notified by his doctors that the stage four cancer had gotten worse since the last month.

Doctors told Albert that this past Christmas might be his last, so his family wanted to give him an extra special holiday. He says that he simply wants to make a snow angel. So, with the help of their community, they were able to gather bags of ice to help make his dream come true.

Right in their front yard, the family was able to create eight tons of fake snow using bags of ice. When everything was ready, the family brings Albert outside to come look. He instantly breaks down in tears. He was so happy to not only get his dying wish but to also be surrounded by his very best friends and family.

“To feel the coldness, all of that, it was really good. I was soaked, even to my underwear, but it was great,” Albert told WFLA.

His family will not ever forget his reaction

Albert was also asked how he believes he got his cancer. He says he thinks he first got it back in the ’60s when he came into contact with Agent Orange. In all his years of cancer treatment, it caused his skin to burn up, so laying down in some ice-cold snow felt amazing on his body. The family all agrees that the look on Albert’s face when he saw the snow was something they wouldn’t ever forget.