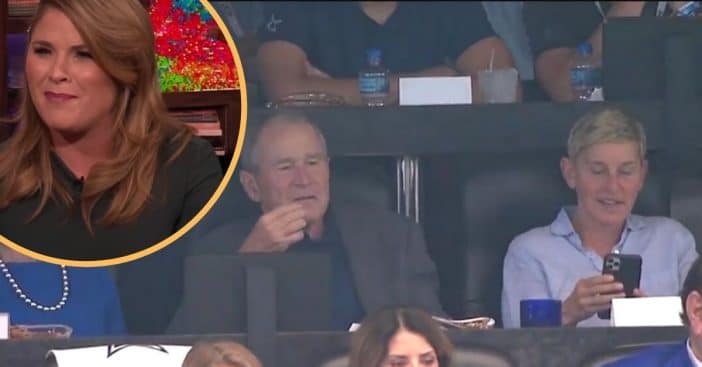 On Watch What Happens Live, host Andy Cohen asked Jenna Bush Hager about a recent controversy surrounding her father. Former President George W. Bush was seen sitting next to and chatting with Ellen DeGeneres at a Dallas Cowboys game. Many people thought it was “weird,” and others even criticized Ellen for talking to the former Republican President.

Andy asked Jenna for her thoughts on their controversial friendship. She said, “Well, I had just had a baby, so to be totally honest, I didn’t pay that much attention to it. But I do think that people can have different beliefs and still be friends.” Andy agreed.

Jenna shared her thoughts on their controversial friendship

She continued, “And I also think decency and humanity should be at the basis of all conversations.” The crowd applauded, so many seem to agree with Jenna’s views.

After the photo started circulating on the Internet, Ellen also brought it up on her show. She began, “They thought, ‘Why is a gay Hollywood liberal sitting next to a conservative Republican president?'”

Ellen continued, “In fact, I’m friends with a lot of people who don’t share the same beliefs that I have. We’re all different, and I think that we’ve forgotten that we’re all different. But just because I don’t agree with someone on everything doesn’t mean I’m not gonna be friends with them. When I say be kind to one another, I don’t mean only the people that think the same way you do. I mean be kind to everyone. It doesn’t matter.”

Click for next Article
Previous article: Heartwarming Reunion Between Astronaut Christina Koch And Her Dog After Almost A Year In Space
Next Post: Valentine’s Day Card From 1818 Shows Profound Expression Of Love