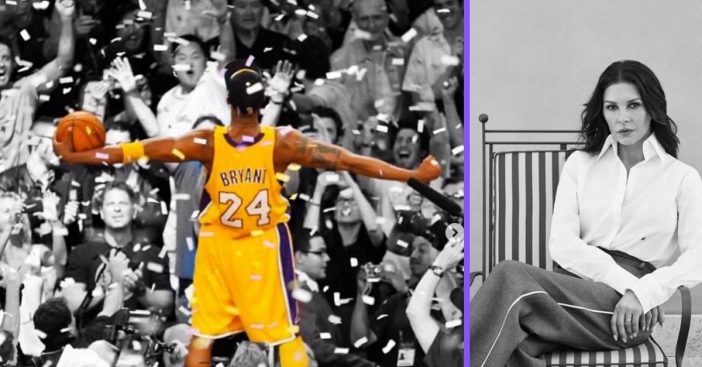 After the shock of Kobe Bryant’s death, many celebrities are sharing their stories and condolences on social media. Catherine Zeta-Jones talked about when she was neighbors with Kobe. They met about twenty years ago, while both living in a community called Pacific Palisades in Los Angeles.

This was when Kobe’s impressive career was just starting. She shared a photo of Kobe in his No. 24 jersey with the Los Angeles Lakers. In her caption, she revealed how they met and how she watched him grow into the legend he became.

She wrote, “RIP Kobe. 24 years ago, ironically, Kobe was my next-door neighbor in Pacific Palisades in LA. Both young and ambitious. We met the day he moved in through his dog, that started to and continued to wander into my garden. His basketball court was my view. I watched his talent and dedication, yet how could I have known that he was to become what he became. Tragic news today. Being a Daddy today took his life and that of his precious daughter. Unimaginable loss to all. Love to the families. #24forkobe 🙏🏻😢”

As of now, the Los Angeles Lakers games have been postponed. Many other teams have been paying tribute to Kobe during games. TODAY reports, “The Toronto Raptors and San Antonio Spurs both took 24-second shot clock violations Sunday in honor of Bryant’s basketball number.”

In addition, “Other basketball teams also paid tribute to Bryant by writing messages on their shoes, taking a moment of silence and lighting up their arenas in the Lakers’ purple and gold to remember the player known as ‘The Black Mamba.'”