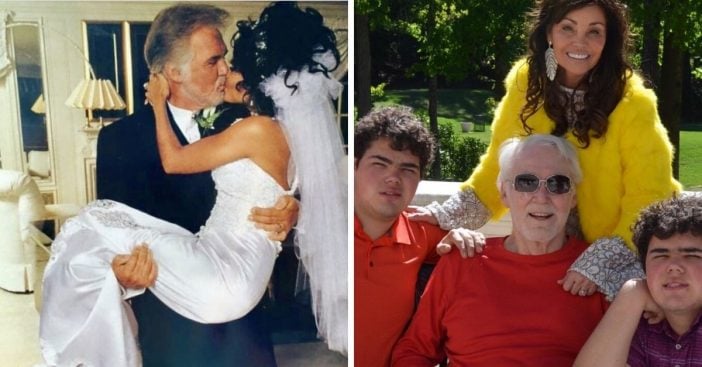 Singer Kenny Rogers hasn’t always had luck in love. He was married four times before he fell in love with his current wife Wanda. Together they share twin boys, Jordan and Justin, who are currently fifteen years old. Kenny has a total of five children from his various marriages.

The couple got married in 1997 and have been going strong ever since. From Kenny’s photos on social media, it seems like he is a family man and loves to take his kids on tour with him. However, it wasn’t always so easy. When Wanda and Kenny first started dating, her parents were not happy.

RELATED: Kenny Rogers’ Mansion In Atlanta Is Up For Sale For $4.495 Million

There is a 28-year age gap between Kenny and Wanda. Wanda’s parents are actually a few years younger than Kenny! So, at first, they were a little uneasy about the relationship, as any parents would be. He assured them how much he loved their daughter and as the years went on, things improved and Kenny says they are best friends now.

We sat down with Kenny Rogers and he revealed while he will miss being on the road, he would love to spend more time with his teen twin boys. He says “they keep me very busy!” Watch the entire interview with Kenny as he answers fan questions below.

Previous article: Suzanne Somers Discusses Her Cancer Diagnosis And Thinking Of Her ‘Mortality’
Next Post: ABC To Air Special Called ‘What is Jeopardy!? Alex Trebek And America’s Most Popular Quiz Show’