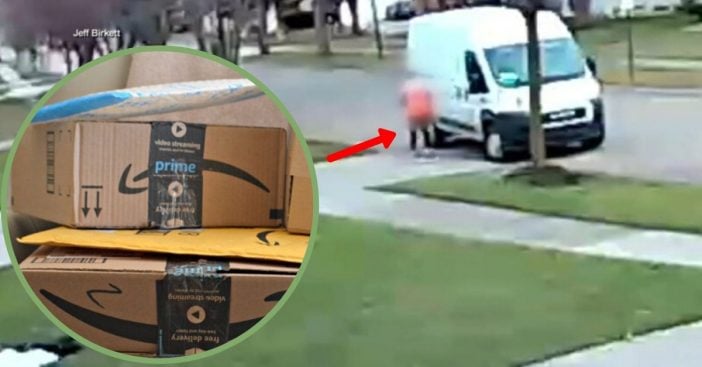 Someone was clearly not in the holiday spirit this year as a delivery driver ran right over an Amazon package! A Michigan man runs over a package three times that he is to deliver to an Amazon customer. Neighbors capture surveillance footage in a Troy, MI neighborhood of the man running over the package repeatedly with the vehicle.

The driver appears to stop in front of the home to deliver the package. He attempts to deliver it before just heading back to the truck, placing the package underneath the truck’s rear tire, and driving back and forth over it multiple times. Fellow neighbor George Porretta is in complete awe and outrage by the video footage he sees.

On December 17th around 4 p.m., Porretta would actually go out to the scene and retrieve what is left of the destroyed package. The only item still in working condition is a smart remote for a garage door. He delivers it himself to the receiving neighbor. Porretta reports that Amazon did replace the order, but is calling for the man responsible to be held accountable for his actions. Especially during the holiday season when many people are ordering online, namely Amazon.

RELATED: Mom Sets Out Boxes Of Trash As Decoy For ‘Porch Pirates’

The delivery van is unmarked, which leads Porretta to believe that the driver is under contract via a third-party service. While Amazon has not commented on the situation, situations like this are sadly common. Complaints are common amongst drivers that work for third-party services, leaving items broken or stolen. At that point, there’s not much Amazon can do except to provide a refund for the item. In conclusion, police are keeping their eyes open for the suspect as they have seen the surveillance footage.