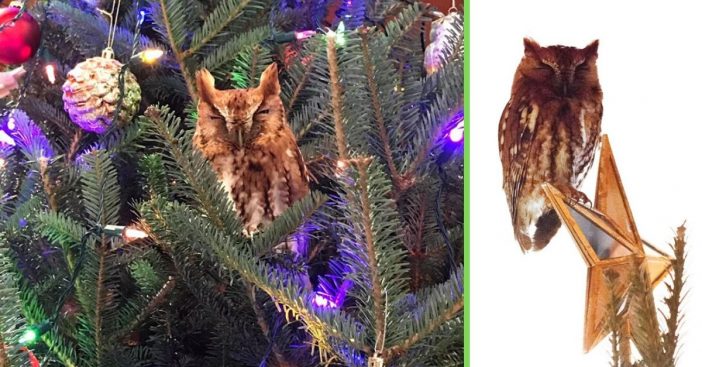 One family in Georgia got the surprise of a lifetime. One night, they discovered an owl hiding inside their Christmas tree! Katie McBride Newman, her husband, and her two children, India and Jack had gotten their tree about a week earlier.

Their 10-year-old daughter India actually found the owl but thought it was an ornament at first. Turns out, Katie loves owls and the tree already had lots of owl ornaments. India came to Katie and said that “that ornament scared me,” and burst into tears.

Family finds a live owl in their Christmas tree

When Katie went to go check it out, she saw the owl turn its head and look at her! She quickly realized it was a real owl hiding in their tree. The family had purchased the tree from a store about a week earlier, so they thought the owl must have flown in and made its home in the tree. They kept some windows and doors open, hoping that the bird might leave on its own.

RELATED: Animals At Rescue Shelter Get To Choose Their Own Presents From Under The Christmas Tree

However, the owl was still there in the morning. They decided to call a nonprofit environmental center called Chattahoochee Nature Center. An employee told them to leave some raw chicken for the owl to eat and that they would come by in the morning. The employee caught the bird, identified as an Eastern screech owl.

Next, the family was able to be involved in the process of returning the owl back to the wild. They put the bird in a crate in a darkened room. At dusk, they left the opened crate outside and the bird flew away. Katie says she swears she can still hear the owl at night.

What a sweet Christmas memory they will all share forever! Check out the video below that the family shared on their Facebook page: