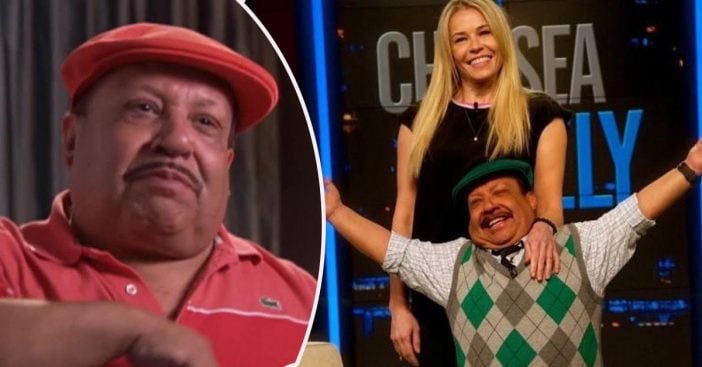 Chuy Bravo, best known for being talk show host Chelsea Handler’s funny sidekick on her show Chelsea Lately from 2007 to 2014 died suddenly on Saturday night. He was 63 years old. His cause of death has not yet been released.

Chuy Bravo has died at the age of 63

She wrote, “Happy Birthday to my OG Nugget @chuybravo. I love this picture because–not only does it look like Chuy just launched out of my peekachu, I look like a member of ZZ Top. Happy birthday Chuy, and thank you for 8 years of heavy petting.”

RELATED: In Memoriam — The Celebrities We Lost In 2019

He was born Jesús Melgoza on December 7, 1956, in Tangancicuaro, Michoacán. He moved to the United States when he was 15 years old and graduated from Sylmar High School. Chuy started acting in the early ’90s, appearing in several films including The Honeymooners and Pirates of the Caribbean: At World’s End.

Chuy was also the founder of Chuy’s restaurant. The actor often visited the locations for surprise visits. He also appeared on the celebrity diving reality competition show called Splash. He broke his heel during the show and had to quit.

In 2012, he revealed that he survived prostate cancer. The actor also admitted that he was a recovering alcoholic and was homeless at one point in his life before finding fame on Chelsea Lately. Chuy started a nonprofit called the Little Nugget Foundation in his hometown to help those struggling with alcoholism.

Sad news right before the holidays. Rest in peace Chuy!