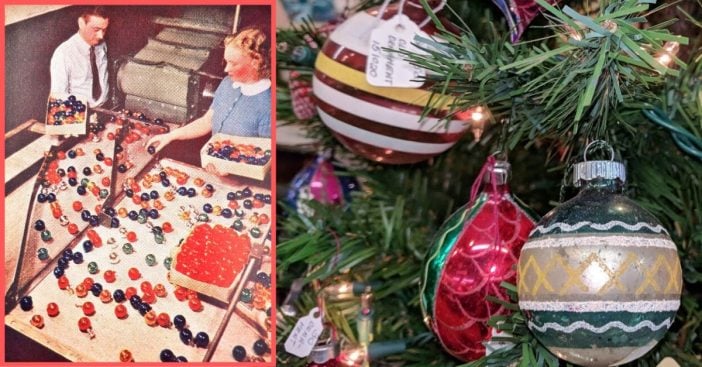 Chances are if you still have family Christmas ornaments that have been passed down through the years, you probably have a Shiny Brite ornament. Even if you didn’t realize you had one! These ornaments are very intricately painted and have very specific designs where you can tell it’s a Shiny Brite. Shiny Brites can often go for $20 to $30 per box and have a long history behind them, starting around World War I.

It all starts with Max Eckardt of Germany who was born in 1890. Originally from Oberlind, Germany, he began training in the toy industry. It was in 1926 when he would first enter the ornament business with his brother, Ernst. They opened their own factory in Oberlind where their family and other employees would create these glass balls by hand.

The history behind those Shiny Brite ornaments

Max’s company also had an office in New York City. He would eventually emigrate to the states and become part of the International Toy Center in the late 1920s. At the time, there was another war looming and Max feared that the states’ supply of German glass ornaments would be stopped. So, he founded the Shiny Brite Company in 1937. He calls his company ‘Shiny’ because of how the ornaments were made; with silver nitrate, so they would stay shiny for good!

RELATED: 15 Toys From The Sears Wishbook That We Were Wishing For Years Ago

In order to keep his company thriving, he would partner up with New York’s Corning Glass Company. He was promised that Woolworth’s would place a hefty order so long as Corning could modify its glass ribbon machine to produce ornaments instead of light bulbs. Woolworth’s ended up ordering more than 235,000 ornaments in 1939. They sold for two cents apiece!

The popular name lives on today

It’s safe to say that Max’s plan proved to be worth it since Adolf Hitler and the British blockade would ultimately stop the import of European ornaments to the U.S. By 1940, Corning was producing 300,000 ornaments per day and sending them out to artists to decorate. They first began in just silver colors, but would soon expand to red, green, gold, pink, and blue. Max would soon begin offering many different shapes and sizes as well.

By the 1950s, Shiny Brite was ever-evolving and extremely popular. Max had opened four offices in New Jersey to keep up with production demands. The production rates had reached 1,000 per minute. By 1955, a washing machine manufacturer would purchase the company and would eventually produce about 75% of the ornaments sold globally.

Max died in 1961 and the great Shiny Brite name began to fade. That is until designer Christopher Radko revived the name and company in the 1990s. He began selling reproductions of the original vintage ornaments in 2001. They still remain a holiday hit to this day!