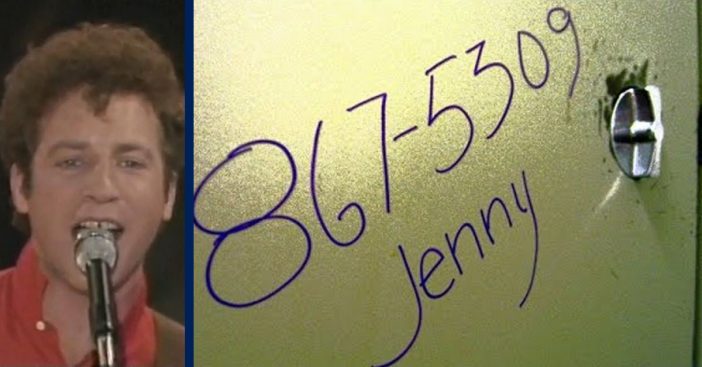 These days, with contacts built into phones and text messages a new norm, many people don’t memorize phone numbers like they used to. Years ago, the alternative was to rifle through tissue-thin pages of large phone books or squinting at address lists. But even today, there is one phone number no one is soon to forget thanks to a song. Can you hear the tune in your head? It’s 867-5309, brought to us by Tommy Tutone to get in touch with Jenny.

While we’re very glad for this insanely catchy tune, quite a few people found themselves less than thrilled. Many Americans had phone numbers that ended up being identical to the number in Tommy Tutone’s song “8675309/Jenny.” Fortunately for Tutone, the song became a national hit. Unfortunately for some homes, people’s natural enthusiasm compelled them to try calling that number. Residential numbers ended up changing, while commercial ones tried utilizing this serendipitous coincidence to their benefit. No matter the response, “8675309/Jenny” became a part of American culture.

Despite the name associated with the song, we actually have two people to thank for this catchy musical number (get it?): guitarist/singers Jim Keller and Tommy Heath. Like plenty of cultural giants, the band – not a person – Tommy Tutone, and the popular song did not spring to life as an instant success. Instead, the two band members gave a lot of thought when creating the song.

RELATED: The True Story Behind The Lyrics Of ‘White Christmas’ Will Break Your Heart

We must also give particular thanks to Keller’s other musical friend, Alex Call. Call had written music for a rock song – just the instrumentation, no lyrics or direction just yet. He played the notes for Keller, notes without words. Call only had one concrete goal in mind. “I was sitting underneath a plum tree in my backyard,” Call recalled, “trying to come up with something that sounded like the Kinks or the [Rolling] Stones, just a four-chord cruncher.”

Hearing those notes, Keller jumped into action and penned the lyrics that would become America’s most popular phone number for ages. Job done, Tommy Tutone recorded it for its second album, and the response was lackluster until the release of “867-5309/Jenny” as a single on November 16, 1981. After facing uncertainty about its future, the band Tommy Tutone ended up with a song that scored No. 4 on the Billboard charts by 1982.

When not experimentally calling the number, listeners speculated about its origins. Between the lyrics and how specific the digits are, people wanted an explanation for the song’s origins. Keller cleared up the debates when speaking with PEOPLE. “Jenny is a regular girl, not a hooker. Friends of mine wrote her name and number on a men’s room wall at a bar,” Keller explained in ’82. “I called her on a dare, and we dated for a while. I haven’t talked with her since the song became a hit, but I hear she thinks I’m a real jerk for writing it.”

Tommy Tutone’s song made many others very popular

The band wasn’t the only entity enjoying popularity from the song. The track became both famous and infamous for all the phone calls that occurred related to the lyrics. Alabama homeowner Lorene Burns changed her number soon after the song’s release out of necessity. “When we’d first get calls at 2 or 3 in the morning, my husband would answer the phone. He can’t hear too well. They’d ask for Jenny, and he’d say ‘Jimmy doesn’t live here anymore.’ … Tommy Tutone was the one who had the record. I’d like to get hold of his neck and choke him,” she stated.

Numerous businesses tried to use the number’s popularity to their advantage. Radio stations, ambitious residents, and even Brown University saw greater phone traffic because of the song, whether intentional or otherwise. When deliberately obtained, sometimes an owner tried to sell the number after being overwhelmed by calls. It’s no wonder they got so swamped. After all, for many years that phone number was at the top of many charts.

Click for next Article
Previous article: Bikers Arrive At Children’s Hospital Colorado With Tons Of Toys To Deliver
Next Post: 89-Year-Old Woman Knits 450 Blankets And Coats For Shelter Dogs