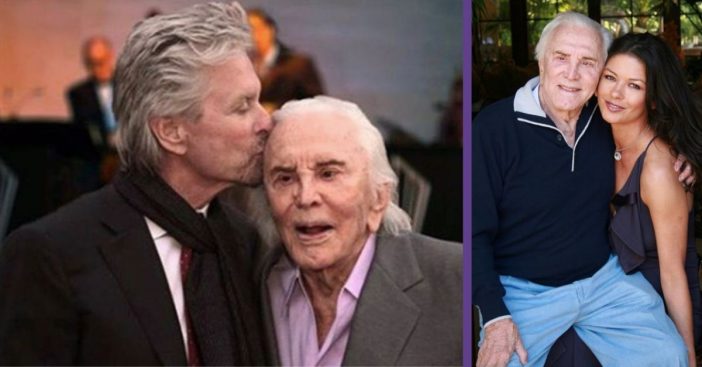 December 9th, 2019 marks Kirk Douglas’ 103rd birthday and Catherine Zeta-Jones made sure to recognize the occasion accordingly. She shared an old photo of the two to her Instagram account. The photo appears to be several years old, with Kirk sitting on Zeta-Jones’ knee. “This guy on my knee, is 103!!!!! Happy Birthday Pappy!!! I love you with all my heart. 😘❤️” she writes in the caption.

Kirk’s son, Michael Douglas, also posted a photo for his father who is just crushing life milestones lately. He posts a photo of himself giving his father a kiss on the forehead. He writes, “Happy birthday Dad! You are a living legend and your entire family sends you all the love in their hearts! #KirkDouglas #103”

Kirk’s birthday is extra special considering his son, Michael, picked up a Golden Globe nomination for his role in The Kominsky Method. Michael recently talked about his father and his old age. He admits that Kirk is tired of big parties, even though his family continues to throw him big celebrations. It’s pretty fitting considering he is living past 100!

The throwback photo for Kirk Douglas by son Michael

All of us at DYR wish this living legend a very happy 103rd birthday! God bless him.