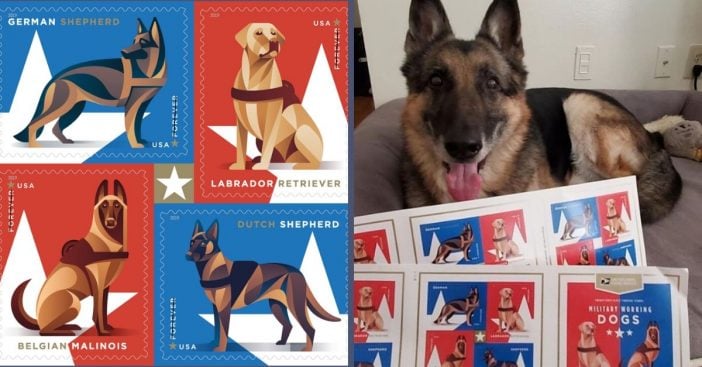 Dogs have been serving alongside humans in the military since the Civil War. To honor our canine friends, The United States Postal Service is offering a new type of Forever Stamp. For instance, the collection is called the Military Working Dogs stamp set. The stamps feature pictures of the four most common breeds that serve in the military.

The breeds featured on the stamps are a German shepherd, a Labrador retriever, a Dutch shepherd, and a Belgian Malinois. In addition, they also featured red or blue backgrounds with large white stars in honor of the United States. A book of 20 Forever stamps costs $11.

Vice-chairman of the U.S. Postal Service Board of Governors David C. Williams said, “As a military veteran and former law enforcement officer, I have the greatest appreciation for these animals and the service they provide. Today, these dogs are born and raised to serve alongside soldiers, sailors, marines, airmen and women and members of the Coast Guard. They are heroes deserving of our respect and gratitude.”

Dogs have been in the military for a long time. For instance, a dog named “Sergeant Stubby” is considered “the grandfather of the war dog.” He fought during World War I in 1918. For over a hundred years, dogs have not only helped the morale of the soldiers but warned them of attacks and spies.

In 2017, there were around 1,600 military dogs in service. In addition, these dogs do an incredible job of serving our country.

You can purchase these stamps at your local U.S. post office, at usps.com/shop, by calling 800-STAMP24 (800-782-6724). In conclusion, the hashtag #MilitaryDogsStamps is also being used on social media to celebrate the collection.

RELATED: U.S. Marine Reunites With Military Dog After Years Of Being Apart And Adopts Him