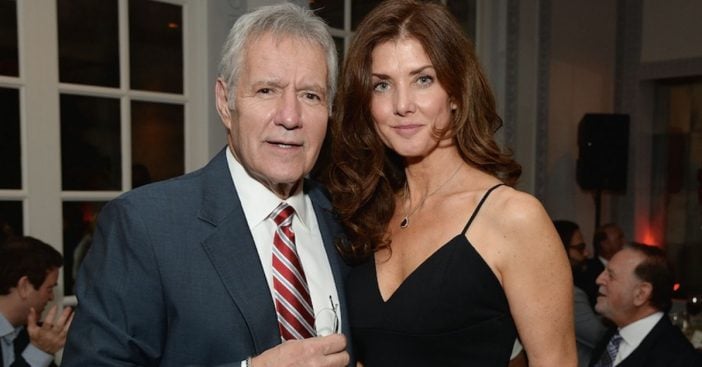 Alex Trebek’s wife, Jean, has revealed how she’s feeling and coping with her husband’s stage four pancreatic cancer battle. She speaks with SurvivorNet recently on how she “stays grounded” with the help of her faith to also keep her husband in good spirits. The 54-year-old is a  licensed practitioner of Religious Science at the North Hollywood Church of Religious Science. She has been using things like sound, meditation, and Reiki to heal others for the last ten years.

Trebek has been going under chemotherapy for his cancer and credits Jean and his fans for helping him stay positive. She talks about her religious practices and how they benefit her husband. “It comes from a place of love, because I want to uplift him … and when I keep my own self buoyed and enjoying my life, I can actually share that with him. He can look at me and have a sense of ‘life is beautiful; my wife is doing something good,” she says.

Jean also has advice for others who are suffering or feeling lost. “Just ask the universe, ‘What’s the next step for me?’ The universe will always respond. I am absolutely sure that we live in a benevolent universe that is always conspiring for our highest and greatest good,” she explains.

One of the latest fans to show his appreciation and support for the game show host was 18-year-old Avi Gupta. He walked away with $100,000 back in June, but he would decide to donate $10,000 of that to cancer research in honor of Trebek. Former contestant James Holzhauer would also donate $1,109.14 to the Naperville Pancreatic Cancer Research Walk. He writes, “For Alex Trebek and all the other survivors.”

Another recent Jeopardy! contestant gave up everything in the game to show the game show host some support. During the “Final Jeopardy” segment, Gaur did not write in his piece. Instead, he writes, “We ❤️ You, Alex!” This catches Trebek off-guard and he gets choked up with emotion.

Contestant Dhruv Gaur says, “When Final Jeopardy came up, I could’ve tried to puzzle it together, but really, just kept thinking about Alex, and thought he should know. I’m just very grateful I got the opportunity to say what I know everyone was thinking. Sending all the love. #weloveyoualex.”

Alex Trebek getting choked up during Final Jeopardy today messed me all the way up. #Jeopardy #WeLoveYouAlex pic.twitter.com/QJVP4hJpGV

Keep fighting, Alex! We all love you!