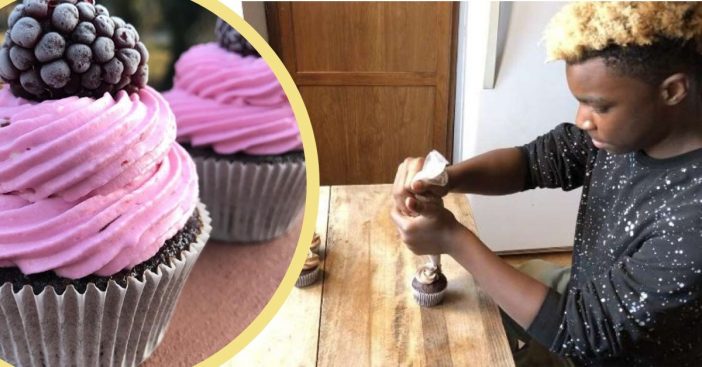 Different business models focus on different areas of the company and its mission. If carefully crafted, a business strategy can tackle multiple areas of interest at once. Remarkably, one young entrepreneur manages all this and more with his cupcake business. Starting at age 9 Michael Platt, now 14, knew he loved baking. He also knew early on that he wanted to run a business based on a meaningful mission. At age 11, he combined those two into a charity that serves the community.

Platt only had a few certainties to work with. His passion for baking stemmed from baking with his grandmother, and gradually he knew he wanted a role of authority. He told CBS, “I knew I wanted to start a business, but I didn’t really know how to do it, I guess.” When he was 11, he began “Michael’s Desserts based on the philanthropic approach of Tom Shoes. “My parents got me a pair of Tom’s shoes for Christmas. And Tom Shoes’ business model is one-for-one, which is my business model,” he recalled. From there, one boy’s passions manifested into a meaningful charity.

Pursuing a philanthropic model benefits everyone

Platt immediately recognized the benefits of maintaining a one-for-one model. When he receives an order of cupcakes, he doubles that order, CNN reports. Those extra cupcakes get packaged and personally delivered by Platt to homeless shelters. If he passes anyone left living on the streets in his native Bowie, Maryland, Platt gives it to them too. Bigger orders offer Platt and his mother Danita extra bonding time as she aids in putting them together. Platt’s parents also help transport donated cupcakes.

While those who are hungry get a tasty dessert to warm their hearts and fill their stomachs, Platt finds enrichment in running a charitable business. Customers can also find an extra bit of sweetness in their cupcakes knowing each order is doubled for a worthy cause. Platt remembers this above all else when considering the challenges behind his ambitions. “Running a business, especially at my age, is kind of hard. Because I have to do other stuff while my friends are at the park or something. But, it’s also really fun because I get to have an experience a lot of people don’t get to have.”

His business and charity ambitions have shown no sign at slowing

Michael Platt showed America he is an exceptional baker when he competed on Food Network’s Kids Baking Championship. Since then, his plans for the future would not look out of place on another show, this time Shark Tank. That’s because Platt is not going to stop at Michael’s Desserts. He already has an established name for his charity. His charity is P.L.L.A.T.E., an acronym for power, love, learning and access to everyone. This young businessman has given a TED talk discussing being a young entrepreneur. He hopes others in his age group see how they too can succeed and themselves and their community. “[Kids] can do what they love to do what they do and also be able to help people,” he said while preparing more cupcakes.

He added, “If everyone does what they can to end a problem that they’re passionate about, then the problem will end.” His mother Danita admits this path comes with a lot of extra work but can’t imagine doing anything but encouraging and helping her son. “when your kids say they’re interested in doing something — something so positive — you’re going to do what any parent does and make it work.” Eventually, Platt hopes to open a pay-what-you-can grocery store offering various necessities for shoppers in need. For now, he is learning what he can and giving back with wisdom, food, and happiness.

Click for next Article
Previous article: Clint Eastwood Refuses To Evacuate California Wildfires So He Can Finish His Work
Next Post: Tom Hanks’ Son, Chet, Talks About Life Being The Son Of Such A Beloved Actor