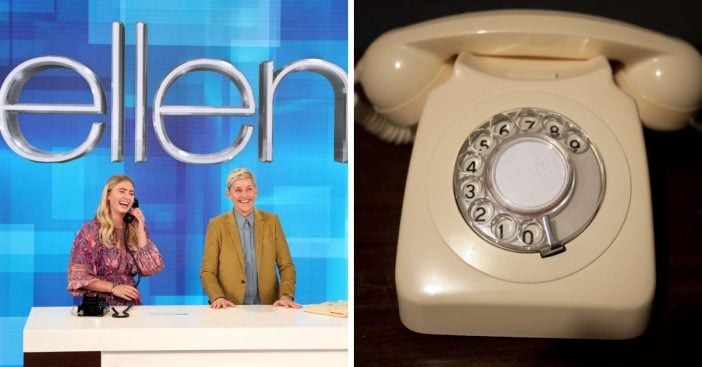 Recently on The Ellen DeGeneres Show, Ellen asked a 17-year-old girl named Marley Flandro to complete a difficult task… well difficult for a teen anyway. She asked the teenager to use a rotary phone on live television. Obviously, Marley had never used a rotary phone, since they were already out of style by the time she was born. The results were hilarious!

Ellen started the segment by talking about nostalgic items that the Internet has made go away. Things like maps, phone books, etc. It was basically a list of things we love here at DYR, including rotary phones. Ellen said, “I was curious how many young people could function without (the Internet).”

Watch a teen attempt to use a rotary phone

Ellen asked Marley to fold up the road map, then look up the phone number for a store called Golden Muffler and dial the number on the rotary phone. She only had a few minutes to do all of this! Marley struggled to fold up the map and Ellen had her move on to the phone book.

Marley also struggled to find Golden Muffler in the phone book, so eventually, Ellen gave her the phone number. It is really hilarious to see how difficult it is for a teen these days. She tried a few times and did not succeed in dialing the number and calling it correctly. She joked, “My parents are probably so disappointed.”

Even though Marley didn’t complete the challenge, Ellen still gifted her with a 65-inch Roku TV for trying. Watch the entire challenge below… we guarantee you’ll get a laugh out of it!