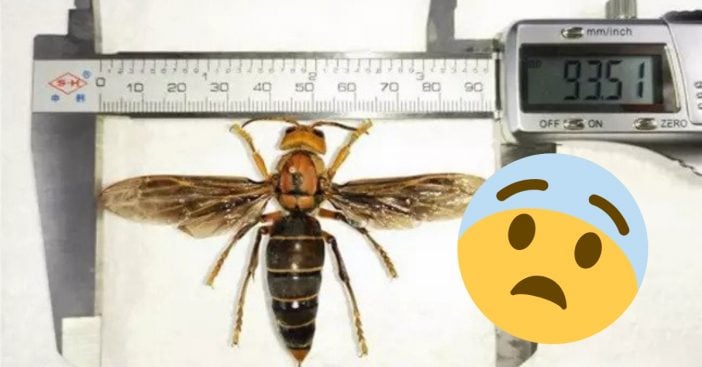 If you’re scared of wasps, you might not want to visit southern China. Even more terrifying, we are talking about killer wasps here. Scientists have discovered a new species of killer wasps that have actually killed people. In addition, they are said to be the largest wasps known on the planet. The species is named the Godzilla hornet and it was found near the city of Pu’er in China.

Godzilla hornets are over 2.3 inches with a wingspan of 3.9 inches. Luckily for those of us in the United States, they are only found in warmer, subtropical parts of eastern and southern Asia. Scientists are trying to discover if they are a new species of hornet, or if they are just being discovered.

Scientists have also discovered the world’s largest bee on an Indonesian island. It is about the size of your thumb. This bee was actually first discovered in 1858, but wasn’t found again until 1981! Recently when they found the bee again, they made sure to photograph it and capture it on video.

RELATED: What To Do If You Find Bees In Your Home – And Why You Shouldn’t Kill Them

According to Lad Bible, natural history photographer Clay Bolt got a photo of the insect on camera. He said, “It was absolutely breathtaking to see this ‘flying bulldog’ of an insect that we weren’t sure existed anymore, to have the real proof right there in front of us in the wild.

He continued, “To actually see how beautiful and big the species is in life, to hear the sound of its giant wings thrumming as it flew past my head, was just incredible.” What do you think about new species of killer wasps and giant bees?

In conclusion, if you’re interested, you can learn more about giant wasps below:

Click for next Article
Previous article: Neil Young Claims His U.S. Citizenship Application Is Being Delayed Because He Uses Marijuana
Next Post: Check Out This ‘Christmas Vacation’ Ceramic Village For The Holidays