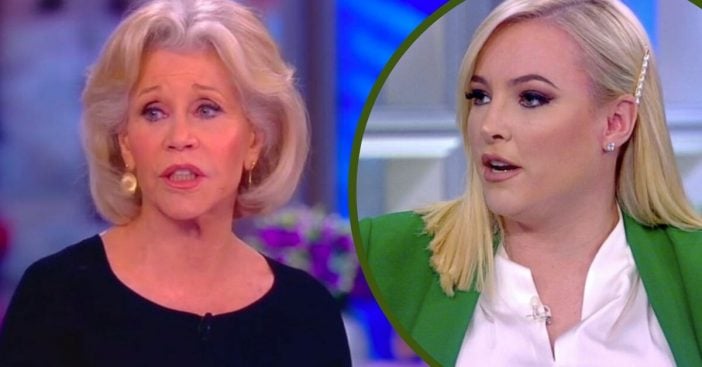 Activist Jane Fonda made a visit to The View recently, but co-host Meghan McCain was nowhere in sight. Some think it may have been more than just a coincidence! It’s worth noting that Fonda adamantly opposed the Vietnam War. While McCain’s late father, John McCain, was captured by the North Vietnamese and was tortured and beaten for 5+ years.

However, during one trip to Vietnam in 1972, Fonda would pose on an anti-aircraft gun. This would lead to her eventual nickname “Hanoi Jane.” Years later, she would admit that she regrets sitting on the weapon.

.@Janefonda defends her four arrests for taking part in climate change demonstrations on Capitol Hill, saying “we have to up the ante and engage in civil disobedience which means risking getting arrested.” https://t.co/B1ZKxyDQlb pic.twitter.com/l74a9TF9gZ

On The View‘s Twitter account, they post a video of Fonda talking about her arrests during her protest for climate change. They say that Fonda “defends her four arrests for taking part in climate change demonstrations on Capitol Hill, saying “we have to up the ante and engage in civil disobedience which means risking getting arrested.””

In the video above, Fonda says that she supports “engaging in civil disobedience” in order to get their point across. Of course, with such a highly political discussion with a highly political activist, many viewers wondered where Meghan would be. The View panelists and their team both declined to give an explanation on Meghan’s whereabouts and if it was because Fonda would be joining the panel that day.

Meghan was not there to question Fonda, but one of them was…

While Meghan wasn’t present to press Fonda with questions, co-host Abby Huntsman did. She asks Fonda about whether she should engage in “peaceful protests” instead to involve not breaking the law. That would then prompt Fonda’s answer about engaging in “civil disobedience.”

Fonda has been protesting for climate change in Washington, D.C. at the Capitol every Friday for a few weeks now. She plans to do it every Friday until the end of the year. Fonda also says that every time, she has “planned” to get arrested. One recent celebrity she has taken under her wing with her includes Ted Danson, who was also arrested recently at the protest.

For a closer look into Jane Fonda’s climate change protests, take a look at the video below.

Previous article: When You Can Watch ‘A Charlie Brown Thanksgiving’ This Month On ABC
Next Post: Granny Pods – The New Housing Units That Allow Your Aging Parents To Live In Your Backyard