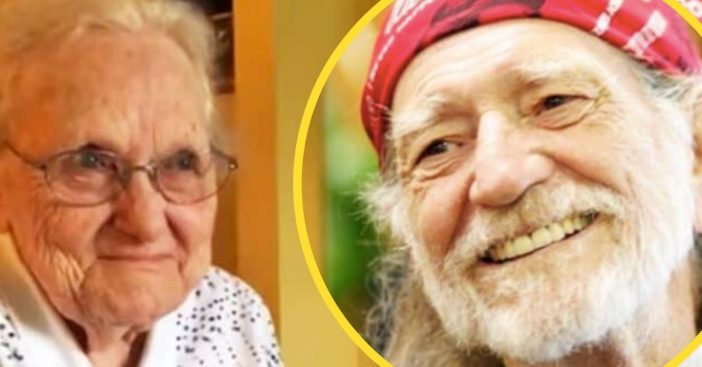 92-year-old Lyndel Rhodes couldn’t contain her excitement when she learned that country icon Willie Nelson recorded a song she wrote. Rhodes had written a song a very long time ago called “Little House on the Hill.” In 2016, her son, famed songwriter and producer Buddy Cannon, would help in making his mom’s dream of becoming a published songwriter come true.

Cannon has worked with a wide range of artists like George Strait, Bill Anderson, Jamey Johnson, Reba McEntire, George Jones, Willie Nelson, and Merle Haggard. It was because he had worked so closely with Nelson before that Cannon felt he could pitch his mom’s song to him. “Little House On The Hill” would become the lead-off track for Nelson’s 2017 album God’s Problem Child.

Cannon filmed his mother’s reaction to listening to the recording for the first time at her house. It was in celebration of her first-ever songwriting credit. We can hear the song playing in the background when Cannon asks, “What are you listening to?” She responds, “Little House on the Hill.” When she is asked if she wrote the lyrics to the song, she humbly says she “tried to.”

When Cannon asks her who’s singing it, she replies “Mister Willie.” So sweet! Rhodes begins singing along to the song with Nelson. The camera pans down to her feet, which were tip-tapping in red slippers in excitement! It’s truly one of the most heartwarming videos out there right now. You need to see it to believe it!
Click for next Article
Previous article: Garth Brooks Admits He Can’t Keep Up With Jimmy Carter At Habitat For Humanity
Next Post: Gymnast Shawn Johnson East And Husband Celebrate Their First Baby