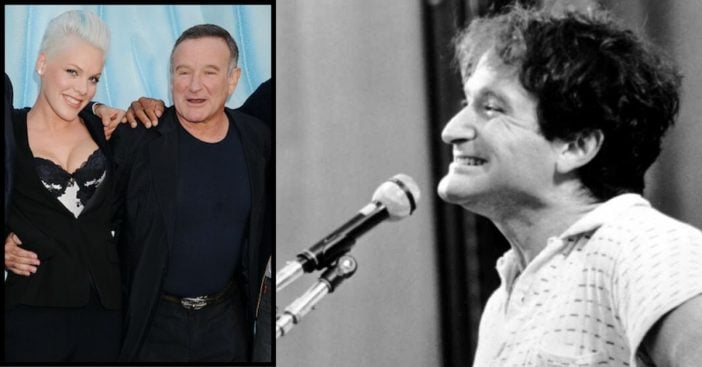 Back in 2003, singer Pink was up for two awards at the Grammy’s ceremony. The awards she was up for include Best Pop Vocal Album for Missundaztood and Best Female Pop Vocal Performance for “Get the Party Started.” The previous year, Pink had won Best Pop Collaboration with Vocals award for “Lady Marmalade.” Her success was booming, and it was the first time she had been nominated solo.

However, that year, Norah Jones would scoop up those awards right from under Pink. She was devastated. However, someone was there who was able to turn Pink’s frown upside down. Robin Williams! He did a 15-minute stand-up improvised routine just for her. Pink remembers the night perfectly.

The improvised skit helped her feel so much better

Pink recalls the day to Billboard. She says, “I was with Carey [her husband], and I was holding on to his arm so f***ing tight because I wanted it so bad.” She says it was when the winners were announced, she broke down and Williams stepped in to help make things better.

“He made fun of everybody that walked by. He was so compassionate and lovely to me that it ended up being one of my favorite moments of my career,” she recalls. “I was so glad I f***ing lost. My Grammy would be sitting down at my guesthouse collecting dust, but I have the memory of Robin Williams being an amazing person.”

We have to admit, that is a pretty awesome and heartwarming experience to have! However, Pink would soon go on to win two more Grammys down the road. She got the recognition she deserved, but Williams was there first to make sure she knew how valuable she was, award or not. We all remember the comedic king, Robin Williams, as he tragically took his own life in 2014. But, we remember him for incredible moments like this.