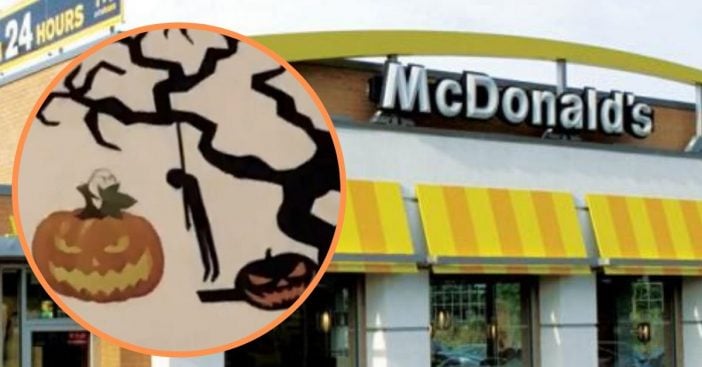 A McDonald’s franchise owner in North Andover, Massachusetts has issued an apology after its Halloween decorations caught the attention of its customers. Many of them were upset at what they saw, claiming that the season decor was displaying insensitive and racist messages. On October 22nd, Erik Pocock and his friends stopped by for a bite to eat when he gets to the register and notices the decor. They appear to be some Jack-O-Lanterns, black bats, and an eerie tree.

When he looks closer, he notices that there was a black rope hanging from a tree. And, a lifeless figure hanging along with the rope.

The controversial Halloween decor in question

“My friends and I were completely shocked that a large establishment like McDonald’s would put decorations like these up for all to see. It’s disgusting, insensitive and I can’t believe someone thought this was a good idea,” Erik tells TODAY Food.

People took to Twitter to express their outrage at the decorations. Many even claim that it was depicting a lynching scene. However, there were a few people who saw the black and orange decorations as a typical symbol of Halloween, death, and gore; all the things that come along with the spooky holiday! Despite the controversy and disagreements among followers of the chain, the McDonald’s franchisee did issue an apology.

Definitely not appropriate. Why are we associating Halloween with lynching which obviously this is undoubtedly a display of such an act.

Chuck Lietz, the owner and operator of the North Andover McDonald’s franchise, releases a statement, apologizing. “We deeply regret that these decorations were on display, and as soon as we identified the inappropriate content, we immediately removed the decorations display,” he states. “Creating an environment that is welcoming and inclusive to all our guests and employees is critically important to us, and we apologize for any unintended offense they may have had on our community.”

Erik notes that the design was also placed in an area that is eye-level with children. Not only that, but the McDonald’s location is across the street from a school. As a result, many children hang out at that particular location. People on social media are saying that since McDonald’s is a “public place,” what they do affects everyone and should be held responsible.

That's the point. This is a public place so what they do effects everyone.

A restaurant staff member did remove the Halloween decor following the incident. The story becomes so big that it’s already been making rounds on local news channels. People interviewed in the news coverage below vary on their answers (on whether or not the image is offensive). The general consensus seems to be that, if anything, the image might be a bit graphic and some may be sensitive to it. What do you think?

Changes To The McDonald’s Menu Throughout The Years.