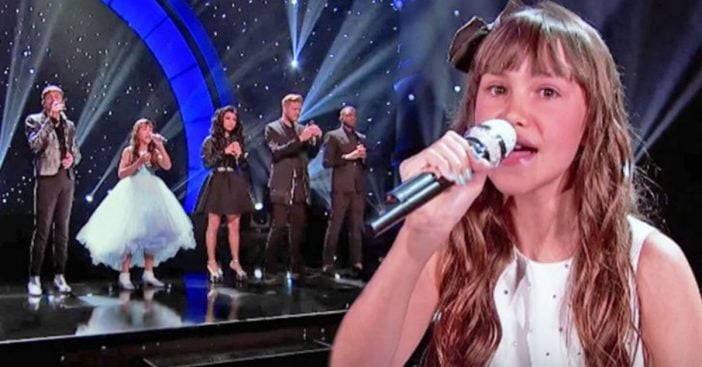 Kaylee Rodgers would become an Internet sensation at just 10 years old when she sang at her school concert. At the time, she performed a Christmas rendition of Leonard Cohen’s “Hallelujah”. With a beautiful voice and touching background story, she captured the hearts of so many people all around the world who watched the video.

After singing in an auditorium full of people, she then went onto NBC’s Little Big Shots to sing in front of millions! She would sing the first verse of the sang song that made her an Internet star, then soon be joined by the award-winning a cappella group Pentatonix. Pentatonix is a pop a cappella group that is also known for their moving cover of “Hallelujah.”

Kaylee’s school principal, Colin Millar, says that singing is a passion for her and not just a hobby. He also says it’s a confidence booster for her. She has autism and attention deficit hyperactivity disorder (ADHD), so she uses singing to help “find her voice.” According to Millar, singing has really done its part in helping Kaylee.

“For a child who came in P4 (7 to 8 years old) and wouldn’t really talk, wouldn’t really read out in class, to stand and perform in front of an audience is amazing. It takes a lot of effort on Kaylee’s part,” Millar says.

What fans all over the world are saying

People were quick to sound off in the comments of the video of how much they loved it. “Pentatonix created a wonderful performance for her. They didn’t overpower her with the power in their own voices and they didn’t steal the show. It was still all about Kaylee,” someone says. Others have words specifically for Kaylee, saying, “She is hands down the most amazing singer I have ever heard. I fell in love with her voice the very first time I heard her. Kaylee has such an amazing voice.”

The performance ends with all the members of Pentatonix giving well-deserved hugs to the star herself, Kaylee! Check out that absolutely stunning performance below.

Police Officer With Cancer Leaves Hospital To Take Son With Autism To First Day of School. Click for next Article
Previous article: Get The First Look At The 2019 Rockefeller Center Christmas Tree
Next Post: Chip And Joanna Announce First Series On Their New Network