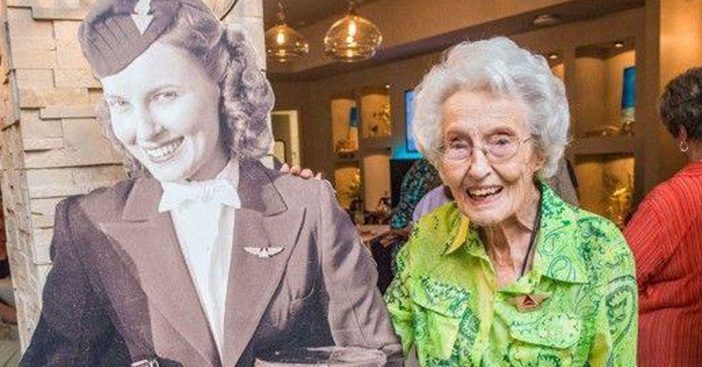 Sybil Peacock Harmon was one of Delta Air Lines’ first flight attendants. She also served in the military during World War II. Sadly, she has recently died at 103 years old. Decades ago, Sybil graduated from nursing school but then decided to join the glamorous life of a flight attendant at 24 years old. At the time, stewardesses were required to be registered nurses.

Delta issued a statement after learning of Sybil’s passing. It read, “We’re saddened to learn of Sybil Peacock Harmon’s passing. Sybil was a beloved member of the Delta family who left her mark as a member of our first class of flight attendants. We will cherish her memory and wish her loved ones well in this difficult time.”

Last year, Delta threw Sybil a birthday party to celebrate her 102nd birthday! She said she felt like a celebrity when she was working as a flight attendant. She said, “People would come out to the airport with their children and they would say, ‘Look, that’s the stewardess!’ They even asked for our autographs.” Very different than it is today.

A Delta press release explains, “Memories of her aviation career include serving in-flight boxed meals of fried chicken, potato salad and a Coke, and giving out chewing gum to passengers due to the lack of pressurization in the cabin.”

She left Delta to join the military in 1943. Eventually, she became a special duty nurse and later First Lieutenant. After she left the military, she married U.S. Army Capt. Wallace Harmon and had a daughter. Her daughter, Peggy followed in her footsteps and became a flight attendant for 25 years. How sweet is that?

Sending our condolences to Sybil’s family and friends! She certainly seemed to have an incredible life. We are definitely feeling nostalgic for the days of early flights and when being a flight attendant was super glamorous.