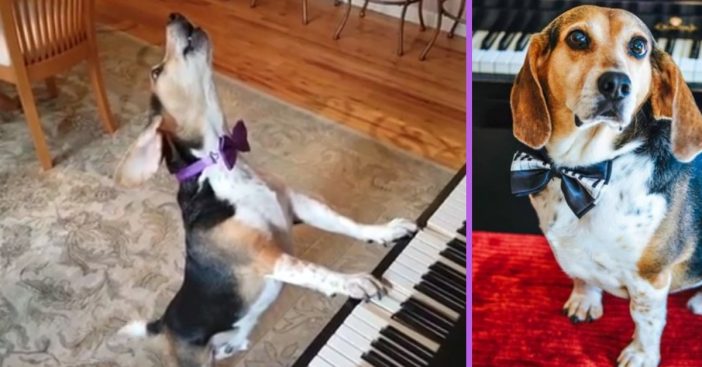 Buddy Mercury is a beagle-basset hound mix that was rescued in 2016. Turns out, he is just as talented as the person he was named after. His humans are very musical and they quickly realized how much Buddy Mercury loves to play the piano and sing. Now he is famous on the Internet for his musical talents and the videos are sure to put a smile on your face.

According to Bored Panda, his owners said, “He is one of the kindest, sweetest dogs I’ve ever met. He absolutely loves people. But he also loves other animals. Even cats! He gets along with everyone.” What a good dog!

His owners play the drums and the piano. They quickly noticed that a few times a day, Buddy Mercury would start jumping and pawing at the piano and howling to the music. Apparently, he doesn’t like to play if someone tries to get him to play, but he likes to play music on his own. Sometimes his owners are lucky enough to catch it on video.

His family continued, “Any time his dad is drumming away, Buddy will be inspired. Same as when Lil Sis is playing her guitar or singing and dancing. It’s amazing.”

His owners say that Buddy wants to share two important messages with others. One is about the joy and importance of music. The other is about rescuing pets instead of breeding them. “We feel he plays his tunes not only for the love of music, and his family but as a call to action for others to consider rescuing an animal. There are so many out there in need of a good, loving and happy home,” they added.

Buddy is a big star on social media and he even has his own website these days, with merch. If you purchase something from Buddy’s website, a percentage is donated directly to shelters. There are lots of products for humans and pets on the website, including clothing that says “Live. Love. Adopt.” They are really cute and would make a great gift for an animal lover in your life.

Buddy is so sweet and we love his music! Check out another one of his performances below: