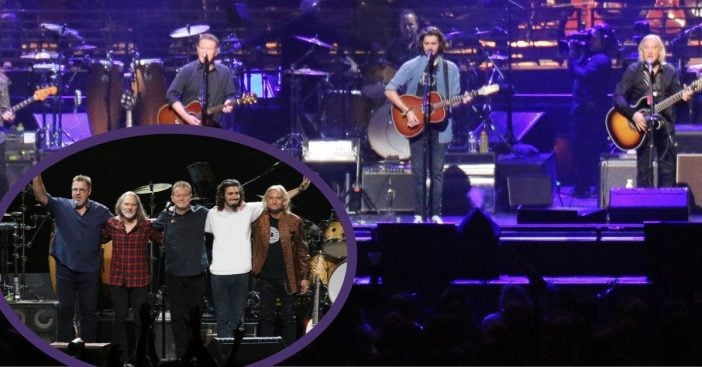 The Eagles’ album Hotel California sits at the No. 3 spot for the best-selling album of all-time, just a few spots behind their No. 1 best-selling album Their Greatest Hits (1971-1975). For example, many of the greatest hits tunes have not been played live. This is so, especially after Glenn Frey’s death in 2016. But, now hardcore Eagles fans have the opportunity of a lifetime!

There have already been 2019 tour dates that are now long gone. However, there is an announcement that there are 2020 North American dates! The tour will kick off with 2 nights at the State Farm Arena in Atlanta, Georgia. In addition, there will then be 2 shows each in New York City, Dallas, Houston, and San Francisco. It will then wrap up at the Forum in Los Angeles for 2 nights there as well.

The 2020 tour dates for the Eagles’ new tour are below:

Ticket information for this exciting tour!

For instance, the tickets for all shows on this tour will go on sale on October 18th at 10 a.m. local time via Ticketmaster. However, American Express cardholders will have access to the ticket pre-sale from October 14th at 10 a.m. through October 7th at 10 p.m. local time. For instance, the complete information for ticket sales can be found on the Eagles official website.

The band performed 3 sold-out Hotel California gigs just last month in Las Vegas. That would mark the first time that the band has ever played the album in its entirety. For example, the performance would feature the current lineup of band members; Don Henley, Joe Walsh and Timothy B. Schmit with Deacon Frey and Vince Gill. In addition, this includes a 46-piece orchestra and a 22-voice choir!

In conclusion, check out one of the more recent performances of Hotel California that was recorded back in July of this year. We’re grateful that someone took the time to record this!

Over 100,000 Masters Recordings From Guns N’ Roses, Eagles, And More Destroyed In Fire.

Previous article: What The Value Of A Dollar Could Buy In The 1960’s
Next Post: The Cast Of Cheers Reunites Tonight On ‘The Goldbergs’