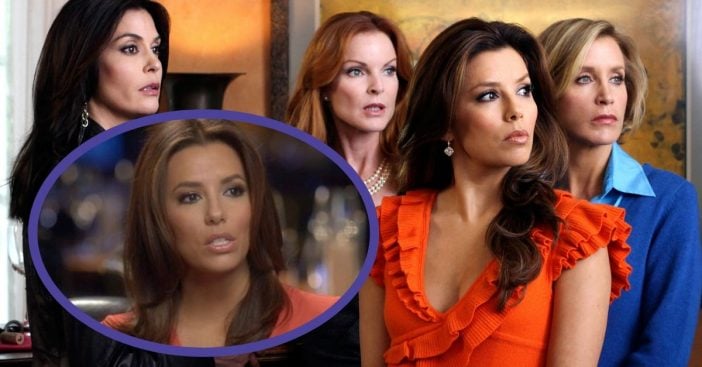 Eva Longoria recently becomes 1 of 27 people writing letters of support for Felicity Huffman. Huffman is in the middle of the college admissions scandal. She paid $15,000 to facilitate cheating on daughter Sofia’s SAT test by having a proctor correct Sofia’s answers.

In the letter that Longoria writes, she details that she was being bullied onset of Desperate Housewives, and Huffman stepped in to stop it. The letter to Huffman was obtained by NBC News.

“There was a time I was being bullied at work by a co-worker,” Longoria writes without directly naming the co-star. “I dreaded the days I had to work with that person because it was pure torture. Until one day, Felicity told the bully ‘enough’ and it all stopped. Felicity could feel that I was riddled with anxiety even though I never complained or mentioned the abuse to anyone.”

Longoria also says that 3 of her co-stars (Huffman, Teri Hatcher, and Marcia Cross) all earn a Golden Globe nomination while Longoria didn’t. She says Huffman is the one who consoles her afterward. “I know I would not have survived those 10 years if it wasn’t for the friendship of Felicity,” Longoria states.

Longoria says even more about not getting a Golden Globe nomination and how Huffman consoles her. “I wasn’t devastated but the press made it a bigger deal than it was between the four of us actors and that did affect me a bit. Felicity came to my trailer and said, ‘It’s just a piece of metal, that and $1.50 will get you a bus ticket.’ She then proceeded to tell me how talented I was and how I never needed an award to know that.”

Longoria does go onto say that these do sound like “first-class problems” that are insignificant to most. But, she does say that “to a young, naive, Mexican girl who felt like I didn’t belong, those gestures meant the world to me.”

In the meantime, Huffman is processing her guilt from the college admissions scandal

The former Desperate Housewives co-star continues to detail the great things that Huffman did while on set. One of those things was helping champion pay parity on set for all the leads on Desperate Housewives. “This fight lasted weeks, but Felicity held strong and convinced everyone this was the right thing to do. And thanks to her, I was bumped up,” Longoria says.

In reference to the college admissions scandal, Huffman could face up to one month in prison at this time. Huffman did plead guilty earlier in April. She says, “I am in full acceptance of my guilt, and with deep regret and shame over what I have done, I accept full responsibility for my actions and will accept the consequences that stem from those actions.”